Postal Workers Beg Trump To Shut The Hell Up

UPDATE: Statement from Doug Jaynes, president of the Colorado chapter of the National Letter Carriers’ Association:

“Postal workers take great pride in the integral role we play in Colorado’s election process. We are proud to play a part in ensuring that every Colorado voter, from the Front Range to the Western Slope, can cast their vote, knowing their ballot will be safely delivered by Colorado’s letter carriers and other postal employees – just as we have sworn under our oath of office to protect and uphold the Constitution.

Donald Trump’s attacks on the integrity of Colorado’s postal employees – nearly a quarter of whom are veterans – are offensive and insulting. He owes the thousands of dedicated Coloradans who uphold the integrity of our state’s elections an apology.” 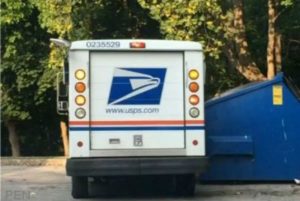 The head of the union representing postal carriers, accompanied by an energized Gov. John Hickenlooper, on Monday denounced remarks made by GOP presidential candidate Donald Trump over the weekend that raised questions about the integrity of Colorado’s mail-ballot election.

Doug Jaynes, the president of the Colorado State Association of Letter Carriers, called Trump’s remarks during a Saturday rally in Golden in which the candidate talked about mailed-in ballots being potentially thrown away an “insult” to his profession.

“It’s so important that people don’t get concerned that their ballots aren’t safe,” Jaynes told a small gathering of Hillary Clinton supporters at a Democratic campaign office in Lakewood…

Gov. John Hickenlooper punched one of the more obvious holes in Trump’s logic:

Hickenlooper, a Democrat, touted the integrity of the U.S. Postal Service and asked in a scoffing tone how postal carriers would even know which ballots to discard if they were engaged in such activity.

“What do they have — X-ray eyes?” he asked, to laughter in the room. [Pols emphasis]

Of course, all of this is only funny if you’re not one of the people who believe Trump unquestioningly when he claims the election is “rigged” nationwide and especially here in Colorado. If you do believe Trump, you consider postal workers, Democrats at every level of government, and apparently even Republicans in an election supervisory role in our state to all be in on some kind of massive conspiracy.

Given the fact that postal letter carriers are out by themselves in the community every day, and already have to contend with unruly dogs trying to shred their ankles among other occupational hazards, you can understand why they don’t want the burning rage of Trumpmerica shadowing their every step. Especially after next Tuesday.

So for the record, neither postal workers, Republican county clerks, our Republican Secretary of State, nor anybody else who may be in lawful contact with your mail ballot once it leaves your physical custody has any desire to trash it.