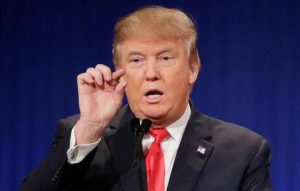 Donald Trump knows this much about Colorado elections.

Donald Trump for the second day in a row questioned the validity of this swing state’s largely mail-in voting system, the latest instance of the Republican nominee expressing skepticism about the legitimacy of the electoral process.

Trump kicked off his rally here on Sunday by encouraging his supporters to “make sure” their ballots are properly counted, saying that he is a “skeptical person” when it comes to the state’s largely vote-by-mail process. He then encouraged his supporters to get a “new ballot” in person at a local polling location.

“In some places they probably do that four or five times. We don’t do that. But that’s great,” Trump said Sunday, appearing to hint at the possibility of voter fraud in Colorado, a rare prospect Trump has continued to hammer on the stump.

The spokesperson for Colorado’s Republican Secretary of State Wayne Williams could not be any clearer with her response:

“From my perspective, it’s just a lack of understanding of all the safeguards and all the processes that we have in Colorado,” she said. [Pols emphasis]

Trump’s “lack of understanding” about how elections work, either in Colorado or anywhere else, is nonetheless fueling a fresh round of conspiracy-making among Republicans bracing themselves for what may well be an historic defeat next week–and in the context of Trump’s vague threats to not respect the results of the election, a potentially scary development. As a Republican in the position of presiding his first statewide election this year, we have real sympathy for Secretary of State Williams and his longsuffering spox. Williams has to do the responsible thing, which is reassure the voters of Colorado that the system is sound, while not becoming too vocal in criticizing his party’s presidential nominee. It’s a tough needle to thread.

Is there more Williams could be doing to call out Trump’s baseless falsehoods about our elections? Probably. Is he doing more to combat this misinformation than his predecessor Scott “Honey Badger” Gessler would have done? Definitely–and that’s to Williams’ profound credit.

For the next week, we think one of the most important things every one of us who understands that our elections are not under threat from any kind of systemic fraud can do is tell everyone you know. Especially the people you know who are kind of, you know, unhinged. By openly attacking the election system just before an election he is likely to lose, Trump is playing with fire in a way we haven’t seen in American politics…maybe ever.

No one should be helping Trump undermine confidence in our most precious of institutions, and we’re relieved to see that Williams has this measure of integrity.