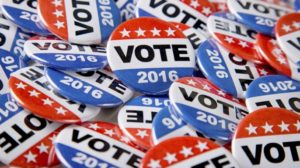 As the Colorado Independent’s Corey Hutchins reports, it’s a milestone not seen by very many in Colorado politics today–and for the younger members of the political class, not even in their lifetimes:

With two weeks until ballots drop in Colorado, new voter registration data show there are more registered Democrats than Republicans here for the first time in three decades.

According to the Oct. 1 figures from the Secretary of State’s office, Colorado has 5,901 more active Democratic voters than Republicans statewide.

That’s a big jump in just the past month.

In September, Dems were still trailing active registered Republican voters here by about 3,000. In the past 30 days they closed the gap — and then some.

What we’re seeing here, in addition to the natural spike in political interest in a major election year, is the fruits of Democratic field campaigns operating out of dozens of offices across the state and coordinated with candidates at every level from county and statehouse to the presidential race. By all accounts Republicans are distantly behind Democrats in field organizing efforts this year, a reflection of Donald Trump’s apparent disregard for the importance of field campaigns. While independent voters remain the largest segment of the electorate in Colorado, this Democratic surge in voter registration is a good indicator that their get-out-the-vote plan is gaining momentum. The Democratic edge in active voters in Colorado should scare the crap out of Republicans.

It’s hard to say just how big a difference the evident disparity between the parties’ field efforts will make on Election Day. But if you’re among the many in this business who swear by the adage that “field wins elections,” it could be very significant. As the Denver Post’s Mark Matthews reports:

Democrats had already surpassed Republicans in the total number of registered voters — which includes both active and inactive voters. But gaining the edge in active voters is more significant because inactive voters don’t receive a mail-in ballot and historically vote much less often. [Pols emphasis]

That could be tough for Republicans running statewide, and the trendline could cause trouble for Coffman too, who faces Democrat Morgan Carroll in Colorado’s 6th Congressional District.

Gains by the Democratic Party in voters registration also help blunt the possible impact of “ticket splitting” voters, since self-selected partisans hold truer down the ticket than independent voters predominately interested in the marquee race. And looking ahead it gets even worse for the GOP in the long term, since the historically weak top of the GOP ticket this year will only–there’s no nice way to say this–create more inactive GOP voters.

Much like Dan Maes in 2010, Trump and Darryl Glenn may be setting themselves up to damage Colorado Republican electoral prospects well beyond their own failed campaigns.