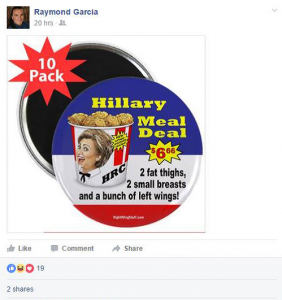 I called Raymond Garcia, a Republican candidate for Colorado state house, after I saw a couple memes he posted for his Facebook friends.

One depicts an image of Hillary Clinton on a bucket of “HRC” Kentucky Fried Chicken with the text, “Hillary Meal Deal, 3 fat thighs, 2 small breasts, and a bunch of left wings.” (“Crispy Commie Recipe.”)

The other was a anti-Hillary version of an anti-Trump statue.

Asked if he’s worried that these posts, which were obtained from a source, might offend people, the House District 1 candidate said:

Garcia: “I can’t help it if somebody gets offended. If they get offended, that’s their deal.”

Delta County Colorado GOP chair Linda Sorenson offered a similar response when asked if her Facebook post, comparing Obama to a Chimp, was a joke. A subsequent outrcry led to her resignation.

Garcia, who hopes to unseat Democrat Susan Lontine in the Southwest Denver district, said he posted the memes “in response to a post that somebody else has put up against Trump.”

“So it’s the exact same thing, but it’s been converted over so it criticizes Hillary instead of criticizing Trump,” Garcia said. “It’s just in response to the posts that I’ve been seeing criticizing Trump.”

I saw the Trump statue he’s referring to, but I can’t find a similar meme about a Trump meal deal. The “Meal Deal” meme has been around since at least 2008, when it was labeled “truly horrible” by a New York Magazine writer.

In any case, whether similar memes exist, I can’t find either Hillary meme posted on Facebook by a candidate seeking a state office.

I  asked if Garcia’s intent was to joke.

After I spoke with Garcia Wednesday, he added another post on Facebook, with the text, “I Gave Her 32 Million Dollars Because She Reminds Me of My Favorite Goat.” (See below.) 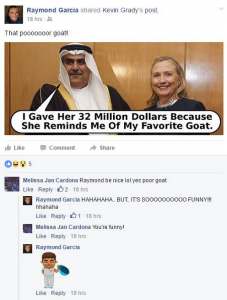 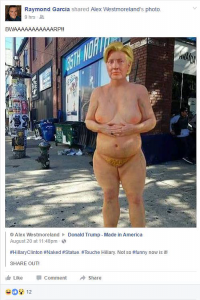