“Balloon Boy” And Family Come Out For Trump 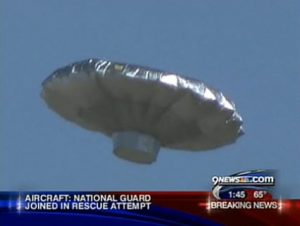 Flight of the “Balloon Boy.”

Here’s a blast from Colorado’s past, as the Tampa Bay Times reports:

Say this for the Heenes, a cheery stage dad who with his wife and three sons have been promoting the “world’s youngest heavy metal band” for a couple of years now: They are persistent.

The family, once at the center of the most notorious hoax in recent history, on Thursday uploaded an original song and video supporting the candidacy of Donald Trump.

“I would have to say that his slogan, ‘Make America great again,’ he really believes that to a T,” said Heene, 54. “As a businessman, he has got to deal with people on a business level, not greasing his palms doing favors.”

The Heenes attended a Trump rally in Jacksonville on Wednesday that drew 15,000. The boys uploaded a video they edited the next day, The Youth of America for Trump, a three-and-a-half-minute hodgepodge of furious metal riffs and scores of images containing crudity and cleverness.

The Fort Collins Coloradoan has a recap of the fateful day that made “Balloon Boy” a household name:

Fort Collins residents will remember the Heenes from the 2009 hoax that garnered the national spotlight. Parents Richard and Mayumi claimed that Falcon, 6 years old at the time, had climbed into the bottom of an experimental saucer-shaped weather balloon before it was launched into the sky and traveled thousands of feet into the air. The chaos ended when Falcon was found hiding in his family’s attic. Richard Heene served jail time and paid restitution for the stunt.

During the Heene family’s very brief moment of fame, we learned that Richard Heene’s kids were into heavy metal parody songs, such as the now-apparently removed music video in which the Heene kids celebrate the fact that they are “not pussified.” We haven’t heard much from the Heene family since 2009, presumably since no reality TV show could ever give them more fame than they got from pranking the entire world.

And with that, their endorsement of Donald Trump makes perfect sense.