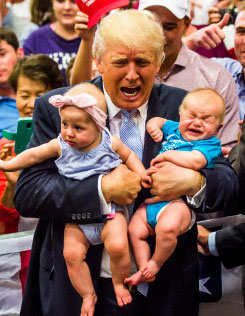 Rep. Mike Coffman can relate to these Colorado babies.

Congressman Mike Coffman has no idea what to do about Donald Trump.

In any other election year, an incumbent Republican Congressman in a swing state wouldn’t give much thought to backing the Republican candidate for President. It is unusual, to say the least, for an incumbent Republican such as Coffman to repeatedly decline to explain whether or not he supports his Party’s nominee for President – particularly when you consider that there are now less than 100 days until Election Day.

On Sunday, Coffman’s name appeared in a prominent New York Times story about a Republican backlash against Trump in the midst of Trump’s prolonged verbal battle with Gold Star parents Khizr and Ghazala Khan. Coffman is quoted by the Times as saying he is “deeply offended” that Trump would criticize anyone who has lost a loved one to military service. Over the weekend, Coffman also sent out this message attacking his Democratic opponent in CD-6, state Sen. Morgan Carroll:

“I’ve made it clear where I disagree with Donald Trump. State Senator Morgan Carroll in in such lock step (sic) with Hillary Clinton that you’d think they were running mates.”

In typical contradictory Coffman fashion, the Aurora Republican is trying to make you believe that he might oppose Donald Trump for President while never actually saying that he opposes Donald Trump for President. Coffman criticizes Carroll for backing Clinton – an endorsement that Carroll has already made plain – but he won’t even take a side in the Presidential race. How is it more admirable that Coffman waffles on the very future of our country when his opponent does not? Coffman wants voters in CD-6 to choose him over Carroll; should Coffman not be asked to voice his choice for the top of the ballot?

Coffman may criticize Trump from time to time, but in February his spokesperson said that Coffman would “obviously” support the Republican nominee for President. Coffman won’t actually say that himself, but he also won’t say that he does not support Trump; as politically petrified of Trump as Coffman may be, he still isn’t willing to make it known to thousands of Trump backers in CD-6 that he is not on their side. Coffman can’t get re-elected unless Trump voters also check the box for him in the fall, so for now he remains in Presidential preference purgatory.

How long can Coffman maintain this political tap-dance where he sort-of-but-not-really refutes Trump? As Greg Sargent writes for the Washington Post on Monday, Coffman’s non-position on Trump is rapidly becoming untenable:

Donald Trump’s continuing war with the Khan family — which Trump inexplicably continued to keep in the news this morning with a series of new tweets — raises the specter of a brutal trap for Republicans.

It’s this: If individual Republicans don’t break off their support for Trump’s candidacy now — by, say, withdrawing their endorsements — they run the risk of having no choice but to do so after Trump sinks even further into wretchedness and depravity, to a point of true no return. (Presumably there is such a point.) At that juncture, their move will look unprincipled and desperate, leaving them stained — perhaps irrevocably — with their previous willingness to stick by him during much of his descent, and depriving their break with him of whatever moral force it might have had if done earlier. [Pols emphasis]

As some Republicans are already remarking, Trump’s battle with the Khan family makes it harder and harder to avoid acknowledging the possibility that we really have no idea how low Trump will sink.

Plenty of elected Republicans have publicly said that they do not – and will not – support Trump for President, so it’s not as though Coffman would be wading into uncharted waters here. It wouldn’t take any moral conviction or strength of character for Coffman to denounce Trump now, but Coffman is more concerned about what potential voters will think of him if he actually picks a side.

Many Republicans have apparently decided that Trump’s continued attacks on the Khan family have crossed their moral line and disqualifies Trump from receiving their support. This is not Coffman’s position. Not today, anyway.

Coffman’s spokesperson is on the record saying that he would support Trump, but the Congressman won’t say whether or not that statement is accurate. Perhaps Coffman is waiting for Trump to sink “even further into wretchedness and depravity,” as Sargent writes, before Coffman will take an actual position on the Republican Presidential nominee. This is a dangerous strategy for Coffman, because if Trump does continue to sink lower and lower, Coffman will have to answer another question as well: “How is it that you waited to take a position on Trump until now?”

Mike Coffman is notorious for claiming to be for and against a lot of different things, but it’s not possible to remain publicly ambivalent about Donald Trump.