Get More Smarter on Tuesday (July 12) 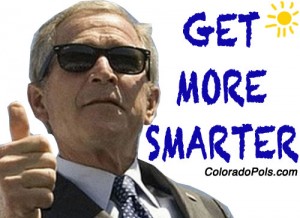 If you’re in Northern Ireland and Protestant, Happy Orangemen’s Day! It’s time to Get More Smarter with Colorado Pols. If you think we missed something important, please include the link in the comments below (here’s a good example). If you are more of a visual learner, check out The Get More Smarter Show.

So ends the most bitter Democratic campaign rivalry since Barack Obama beat Clinton for the 2008 presidential nomination. Republicans have sought refuge from the unfolding catastrophe at the top of their ticket by playing up disunity between Sanders’ grassroots supporters and the “mainstream” Democratic party personified by Clinton. Now that Sanders has delivered this unequivocal endorsement, all but the most ardent Bernie supporters–in many cases “low propensity” voters anyway–should come back into the fold after an appropriate period of grieving and coping.

To all the Bernie voters who want to stop bad trade deals & global special interests, we welcome you with open arms. People first.

Good luck with that! We’re just not foreseeing a mass exodus of Bernie backers to Trump.

► On the Trump side in Colorado news, defeated GOP U.S. Senate candidate Robert Blaha is taking his blowhard trademark rhetoric to the Make America Great Again campaign as Trump’s Colorado campaign co-chair. After Blaha made a big splash with his wild “out-Trumping” comments as a Senate candidate, this seems right as rain.

► The Durango Herald’s Peter Marcus has a good story on the relatively thoughtful response of GOP U.S. Senate nominee Darryl Glenn, who is black, to the nationwide controversy over police shootings:

In the wake of recent shootings that have sparked nationwide protests – in which two black men were killed by police last week in St. Paul, Minnesota, and Baton Rouge, Louisiana – Glenn said “words are hard to find,” and then proceeded with a nearly 900-word statement.

In addition to highlighting the shootings by police, Glenn also underscored Dallas, where five police officers were killed last Thursday by a man who investigators say was motivated by the recent killings of black men by police. Glenn called the events “unspeakably evil.”

“With tragedy like this unfolding around us, we need to hold in our head two distinct thoughts at the same time: You can support and be grateful for your police and at the same time find the actions of certain individual police abhorrent,” Glenn said.

► Speaking of Darryl Glenn, he’s basically out of money. And incumbent Democratic Sen. Michael Bennet has over $6 million on hand.

► Have we mentioned that the Republican field game in Colorado is looking increasingly desperate? Well, there you go. It’s very nearly time to panic.

► Why did the VA hospital run so far over budget? We still don’t know, just like we don’t know why new fighter planes, ships, and missiles cost so much more than predicted. It must be a military thing.

► A new study from CU says many, but not all of the instances of “flaming tap water” are naturally occurring, not the result of fracking.

► In Garfield County, the GOP board of commissioners is upset about “green groups” meddling in their local business over oil and gas drilling. Hopefully this goes over better than the Planned Parenthood thing.

► At some point, the feds are likely to change the classification of marijuana to something other than “just as bad as heroin.” How many years behind Colorado are they again?