Glenn’s decisive victory in Tuesday’s five-way primary set up an uphill battle with Bennet, once considered vulnerable in this swing state for his close association with President Barack Obama. Only two years ago, Coloradans ousted Democratic Sen. Mark Udall and replaced him with then-U.S. Rep. Cory Gardner.

Having outflanked his fellow conservatives to secure the nomination, Glenn now has to tack to the center — as Gardner did in 2014 — to woo enough of Colorado’s independent voters, who outnumber both registered Republicans and Democrats.

“After one of the most divisive and bizarre primaries of 2016, Colorado Republicans must now rally behind their ultraconservative, nightmare-scenario candidate Darryl Glenn. Glenn denies that climate change exists, believes Ted Cruz should be the next Supreme Court Justice and has called Donald Trump, ‘a patriot.’ It’s no surprise he stands ready to enact the Trump agenda that would hurt Colorado’s hardworking families and move our country backward. Glenn was not the first or even fifth choice of national Republicans, whose recruitment meltdown was shocking, and he begins this general election ill-prepared to face Senator Michael Bennet, who has fought and delivered for the people of Colorado. We look forward to celebrating Senator Bennet’s re-election in November.” 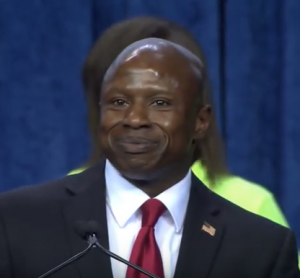 9News is calling the Republican Senate Primary for Darryl Glenn, who jumped out to a big early lead when numbers showed he had a 20,000-vote advantage in El Paso County alone.

ProgressNow Colorado issued the following statement as the news was breaking:

“From Ted Cruz to Donald Trump and now Darryl Glenn, Colorado Republicans appear determined to make the worst possible choices in 2016,” said ProgressNow Colorado executive director Ian Silverii. “Glenn is the least qualified candidate to win a statewide Republican nomination since Dan Maes in 2010, and we all remember how well that worked out for the GOP. Glenn’s arch-right conservatism, refusal to reach across the aisle, and outright hostility to even the idea of compromise has earned him the nickname ‘Gridlock Glenn.’”

“Tonight, the far right in Colorado once again picked a candidate who can’t win,” said Silverii. “While Democrats are rightfully cheering this outcome, the real losers are reasonable Colorado conservatives who have no one left to support in either the presidential or the U.S. Senate race.”