Get More Smarter on Friday (June 24) 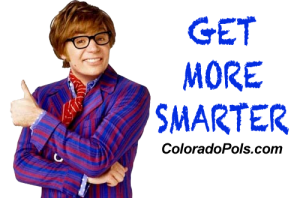 Brexit, baby! It’s time to Get More Smarter with Colorado Pols. If you think we missed something important, please include the link in the comments below (here’s a good example). If you are more of a visual learner, check out The Get More Smarter Show.

► After voters in the United Kingdom unexpectedly voted to leave the European Union yesterday, the entire world is more or less freaking out:

Stocks on Wall Street plunged on Friday after the United Kingdom shocked the world overnight by voting to cut ties to the European Union, a move that many fear could lead to similar votes across the continent and damage a fragile American economy.

The Dow Jones industrial average plunged 611 points , or around 3.4 percent, following big drops in Europe and Asia after UK voters defied late polls and voted strongly in favor of Brexit. The price of gold, a safe-haven in times of crisis, surged nearly 5 percent. The yield on the 10-year Treasury bond fell 18 basis points, the biggest move since the financial crisis, to 1.57 percent as investors fled to safety. The Nasdaq took the biggest hit, falling over four percent in its worst day in five years. Tech stocks that do a lot of business in Europe got slammed.

Un the upside, vacations in England are about to get much more affordable as the pound plunges! The British may not find that very comforting.

► Donald Trump, on the other hand, is really excited about Brexit, which should tell you all you need to know.

“Every one of those Supreme Court justices are here by virtue of immigration,” said state Rep. Joe Salazar of Thornton, who is co-chair of the Colorado Democratic Latin Legislative Caucus “Their families came to this country seeking a better life or fleeing oppression. It is an utter hypocrisy that four members of the court stand against immigrant families.

“Our government, from the Congress to the United States Supreme Court, needs to grow up and recognize the value, economically and culturally, immigrant families are to our nation.”

► The GOP U.S. Senate primary is everyone’s most-watched race going into next Tuesday’s elections. Two wealthy candidates, Robert Blaha and Jack Graham, are spending big to break out of the pack. If you haven’t already, vote in our highly informal poll for who you think will win.

► Democratic Reps. Ed Perlmutter and Diana DeGette both gave powerful speeches during the sit-in by House Democrats this week demanding action on gun safety. Worth watching.

► NARAL Colorado has come out in opposition to Amendment 69, the ColoradoCare plan, citing conflicts with a longstanding state prohibition on abortion funding.

► Nobody is super happy with the compromise bill to phase in beer and wine sales at grocery stores, but it might be enough to forestall a ballot fight this year anyway.

► Simmer down: Sen. Jessie Ulibarri says lobbyist challenged him “mano a mano” after Ulibarri decried lobbyists in a fundraising email.

► Don’t mail that ballot! County clerks say it’s time to drop them off in person or risk not having your vote counted next Tuesday.

► The Dalai Lama visits Boulder–so that’s why everybody was so mellow yesterday.