Get More Smarter on Monday (June 20) 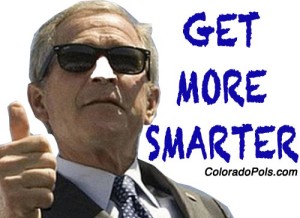 Try not to get too crazy celebrating the summer solstice. It’s time to Get More Smarter with Colorado Pols! If you think we missed something important, please include the link in the comments below (here’s a good example). If you are more of a visual learner, check out The Get More Smarter Show.

► Counting today, the Primary Election is just eight days away. If you haven’t yet received a mail ballot, you should check your registration or address status ASAP. Go to JustVoteColorado.org for more information.

The Colorado Secretary of State’s office has released updated Primary turnout numbers; both Democrats and Republicans are voting/returning ballots at a similar rate of about 12%.

► Former Republican Presidential candidate Ted Cruz is back on the campaign trail, making national news for a stop in Denver today to endorse Darryl Glenn in Colorado’s five-candidate race in the Republican Primary for U.S. Senate. As CNN reports, Cruz took a noncommittal tone toward GOP Presidential nominee Donald Trump:

Ted Cruz returned to the campaign trail for the first time since suspending his presidential campaign to stump for senate hopeful Darryl Glenn in Denver — but at least one fan of the Texas senator isn’t ready to let his 2016 bid go.

As the former candidate acknowledged the “unusual” presidential race, the audience laughed, as a man shouted, “Run, Ted.”

“We may all need to run,” Cruz joked, who kicked off his remarks in his trademark way, saying, “God bless the great state of Colorado.”

Without mentioning presumptive Republican presidential nominee Donald Trump, the Texas senator stressed the importance of checks and balances, “regardless of what happens in November.”

Cruz and Glenn were together at a press event this morning in front of about 100 supporters at the Westin Hotel near Denver International Airport. ProgressNow Colorado points out some of the similarities between Cruz and Glenn.

► The Supreme Court has ruled that statewide assault weapons bans are permissible. As the Associated Press reports:

The justices on Monday left in place a lower court ruling that upheld laws that were passed in response to another mass shooting involving a semi-automatic weapon, the elementary school attack in Newtown, Connecticut.

…Seven states and the District of Columbia have enacted laws banning assault weapons. The others are California, Hawaii, Maryland, Massachusetts and New Jersey, according to the Law Center to Prevent Gun Violence. In addition, Minnesota and Virginia regulate assault weapons, the center said.

Still, nobody is coming to take your guns, no matter what the NRA says.

► Former state Sen. Gail Schwartz continues to harness all of the momentum in her bid to unseat Congressman Scott Tipton (R-Cortez) in CD-3. Schwartz nearly doubled Tipton’s fundraising output in the most recent reporting period for Congressional candidates.

► Denver’s annual PrideFest celebration was a star-studded affair — if you consider politicians to be “stars.” Meanwhile, Democrats were out in force with Get Out the Vote and registration efforts.

► Denver7 reporter Marshall Zelinger continues to examine the signature verification process (or lack thereof) that may have allowed several Republican Senate candidates to unjustly earn a place on the Primary ballot. Zelinger discussed the issue on his Politics Unplugged show on Sunday:

Just days after a woman was charged with forging signatures on ballot petitions for a U.S. Senate candidate, the Deputy Secretary of State told Denver7’s Marshall Zelinger that changes to the signature verification process may be slow to come.

For this November’s election alone, Staiert says her office expects to have to verify more than one million signatures on petitions for ballot initiatives.  Most of those petitions are still being circulated.

Staiert says many of the rules on how signatures are verified will have to be changed by lawmakers. Those changes could come in 2017 or they could be put off until 2018.

Hot potato! You take it!

► The official Twitter account for Republicans in the Colorado Senate continues its feeble efforts to “shoot the messengers” whenever a Senate Republican does something stupid.

► The U.S. Senate continues to discuss gun safety measures, though it looks like little more than election-year political posturing. From Politico:

Spurred by the worst mass shooting in U.S. history, the Senate will vote Monday on a quartet of bills to prevent terrorists from buying weapons and overhaul the national background check system for firearms purchases.

But the chamber’s big gun show on Monday is expected to be just that: political theater.

All four proposals are reheated versions of legislation the Senate rejected in the past. Despite a flurry of negotiations over the past week, and some movement among centrist Republicans toward a compromise that continued over the weekend, there’s little indication the outcome will be any different this time.

The Senate will take a series of roll-call votes at 5:30 p.m. Monday.

As the Washington Post reports, gun safety measures that are likely to fail in the Senate are actually quite popular with voters in general:

The vast majority of Americans favor legislation being considered today in the Senate that would restrict people on the terrorist watch list from buying guns. But the measure will fail because those who oppose stricter gun laws are, on the whole, more passionate and politically organized than the average voters who support them.

This is the Republican Senate Majority’s way of saying, Look, we hear you — we just don’t care.

► Eric Nelson, the con-artist who refuses to drop out of the race in HD-42 despite a looonngg list of problems, would like you to give him some money now.

► Joey Bunch of the Denver Post updates his story examining key legislative races as they enter the home stretch of the Primary Election.

► Colorado company Vestas Wind Systems has agreed to a big project supplying as many as 1,000 wind power turbines for a huge wind farm in Iowa.

► Yes, there are some Republicans who are still plotting a maneuver to try to prevent Donald Trump from becoming the GOP nominee for President when Republicans meet in Cleveland next month for the Republican National Convention.

► You will watch The Get More Smarter Show! And you will like it.