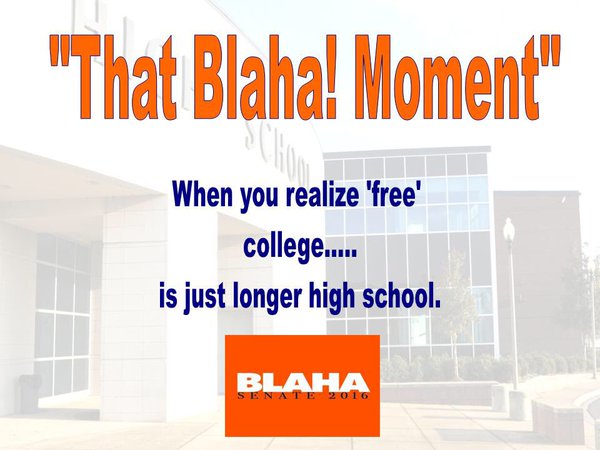 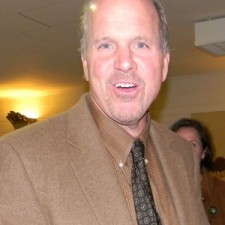 From the social media fails file–Colorado Republican U.S. Senate candidate Robert Blaha’s campaign came up this week with a too-clever-by-half “meme” series they’re calling “That Blaha! Moment,” like those “a-ha moments” you’ve had at important points in your life but…you know, with “Bla-ha” instead of “a-ha.”

Shut up, it’s clever. Check out the example above where he says “free college is just longer high school.”

Wait, what the hell does that even mean? Don’t think about it too much or you might have a different response than “a-ha.”

At any rate, Colorado Democratic Party spox Chris Meagher has his own list of “Blaha moments,” but not the ones Team Blaha wants you to remember! From a release today:

Since there have been plenty of #thatBlahamoments since the beginning of his campaign, here are several moments to remember –

1.    He has vigorously endorsed Trump, even calling him a “man of vision and courage.”

2.    He has said he would’ve voted to shut down the government.

4.    He didn’t originally get on the ballot, then sued to get on, then demanded the Secretary of State resign, then was ruled off, then a judge put him back on.

5.    He invoked a painful rectal exam in a television ad.

6.    He posted a Facebook meme that “seems to compare Blaha and pro-gun politicians to Founding Father Alexander Hamilton, and Blaha’s opponents who are gun control advocates to Hitler.”

7.    He received donations that exceeded the legal campaign contribution limit.

“Robert Blaha has endorsed Donald Trump, and he has shown he is eager to keep up with Trump’s outrageous behavior and rhetoric,” said Chris Meagher, spokesman for the Colorado Democratic Party.

And with that, it’s back to the drawing board for a real “a-ha moment.” Or maybe just a “blah moment?” Either way, it’s better to focus group these kinds of things before you unleash them on a heartless, ridiculing world.

If we were running his campaign, we’d tell Bla-ha (we can’t imagine it without the hyphen anymore) to downplay the unfortunate surname. For every Jeff Flake exception, there’s a Jeff Crank who proves the rule. But it’s too late now for Robert Blaha.