Sen. Chris Holbert Is Terribly Afraid For Your Bathroom

Republican Colorado Sen. Chris Holbert reminded his followers on Facebook yesterday that he’s been trying to stop those nasty transgender perverts from sneaking into your daughter’s bathroom…well, for a really long time: 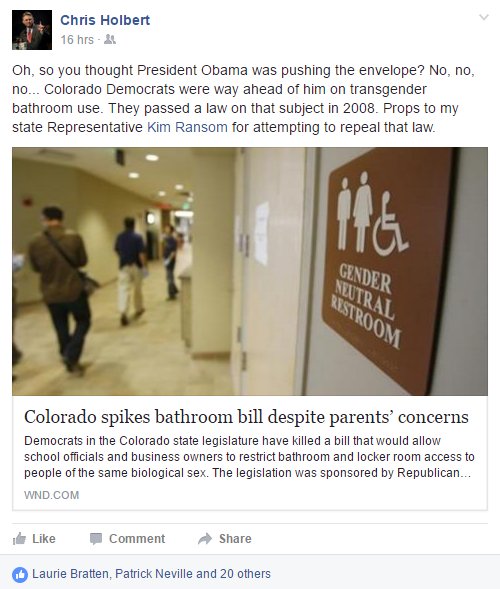 You might think that somewhere in Sen. Holbert’s reasoning on the issue, he might figure out that the law has been on the books since 2008 with no problems whatsoever. That’s consistent with a lifetime of experience on transgender bathroom access for actual transgender Americans, who Sen. Holbert would be shocked to discover having been using the facilities appropriate for their gender expression since long before Holbert ever got caught playing with himself in the boys’ bathroom in elementary school–or whatever happened in childhood that made him so paranoid.

But as Holbert responds to a friendly skeptic, it’s not just about the bathrooms!

That’s right, since 2008 Colorado has been properly accommodating our transgender students in locker rooms too–with no problem! Now again, to a well-adjusted reasonable person, this would be evidence of a policy that works instead of something that should be repealed. In fact, trying to police bathrooms for people who are already expressing the gender they should be to be there is liable to get rather, um, messy. Much messier than what we do today in Colorado, and what President Obama has directed public schools across America to do, which is to let transgender people live life with the same basic rights as the rest of us.

As for Sen. Holbert, he should maybe work out his repressed teenage angst somewhere else.