UPDATE: We’re not sure exactly what to call this, since Keyser’s campaign has already passed “bad” and “worse” and rounded the corner to “disaster,” but yet another shoe is dropping:

Here’s a brief roundup of the absolutely disastrous national press coverage received by Republican U.S. Senate candidate Jon Keyser in the last 24 hours, after his first public appearance in days since revelations of extensive petition fraud that may have help qualify him for the ballot went…well, so far off the rails that it could go down as one of the greatest flameouts in contemporary American politics. 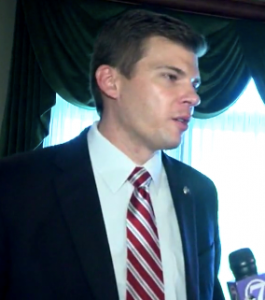 We’ll kick off with the Washington Post’s The Fix blog, which still includes Colorado as one of their most competitive Senate races this week–though just barely, and probably not for much longer:

9. Colorado (D): Are Republicans blowing their chance to take on Senate Democrats’ most vulnerable incumbent, Sen. Michael Bennet? We asked that question in April after one of their top candidates stumbled to get on the ballot for the June primary. Jon Keyser, a 34-year-old combat veteran, is now back on the ballot. But he immediately stumbled with this painful exchange Thursday at a GOP candidate forum, where he failed to answer or sufficiently deflect questions about a report that at least 10 signatures on his petition were forged. Keyser’s missteps and more is why Colorado, a classic swing state where Republicans managed to snag a Senate seat in 2014, isn’t higher on this list.

Safe to say, that’s not what Keyser needs Washington, D.C. reading today. And if you think that’s bad, check out Politico’s Morning Score:

ROCKY DAY — Keyser stumbles on signature forgery question in Colorado Senate race: Former GOP state Rep. Jon Keyser refused to answer questions about 10 signatures on his ballot petitions that were allegedly forged during a candidate forum Thursday afternoon. Keyser instead repeated “I’m on the ballot” six times during the exchange with the moderator. “And I’m going to beat Michael Bennet. And I can guarantee you this. The Democrats are doing everything that they can right now to try to derail me from being on the primary ballot. You know what? I’m not going to let them do it,” Keyser said.

— But things got really awkward afterwards, when Denver7 reporter Marshall Zelinger approached Keyser with further questions on the signatures. Keyser twice called him “Mitchell,” in between repeating, “The important thing is I’m on the ballot.” (Keyser also faux-cheerily asked Zelinger if he was “creeping around my house yesterday,” and whether he’d met his dog: “He’s a great dog. He’s bigger than you are. He’s huge.” Watch the exchange here: http://bit.ly/1s3LskV

[F]raud…strikes at the heart of the petition process, whether the candidate is aware of the abuse or not. And yet Denver7’s Marshall Zelinger has confirmed at least 10 instances of forged signatures on Keyser’s petitions in a district where he collected only 20 more than the minimum. Worse for Keyser, the Denver7 report says “many more signatures appear to have the same handwriting style and characteristics” as the fraudulent 10.

If Zelinger’s report survives scrutiny — and especially if additional forgeries are identified — then Keyser may not belong on the ballot. In that case, even if his name must remain there, GOP voters should take note — especially if Keyser can do no better than he did Thursday to explain it, when he repeated robot-like the mantra, “I’m on the ballot.”

Last night, Keyser attended a second U.S. Senate Senate candidate forum, after the forum earlier in the day in which Keyser’s not-so-thinly-veiled threats against Denver7 reporter Marshall Zelinger were caught on camera and subsequently went viral. 9NEWS reporter Jonathan Gonzales again cornered Keyser on the question of petition fraud–and while this time Keyser didn’t threaten the reporter with his Great Dane, he again did himself no favors:

Keyser’s incredibly bad response to these questions about his petition signatures, first by hiding for days from the allegations and then his disastrous on-camera performances yesterday, do much more than raise questions about Keyser’s fitness to serve as a U.S. Senator. Having had so much time to formulate a response to these allegations and failing so miserably to do so, one has to ask at this point if Keyser knows more about the petition fraud his campaign is accused of than he is letting on. It should have relatively straightforward for Keyser to put distance between himself and his campaign hires and subordinates by claiming ignorance. While not a great answer, it would still have been much better than repetitious non-answers that satisfy no one.

Or threatening a reporter on-camera with your giant dog.

After yesterday’s nigh-on unbelievable developments, we’re not completely sure what the next steps in this story even are–but it will likely involve the Denver and Jefferson County district attorneys who have been contacted about investigating the case. Behind the scenes, we expect Keyser is doing whatever he can to undo the damage with national GOP funders and strategists at the National Republican Senatorial Committee–who all watched this epic meltdown via D.C. and local media outlets.

But folks, we just don’t think there’s any coming back from this. Whether he ends his campaign now, or limps along Scott McInnis-style to defeat in next month’s primary, Keyser’s U.S. Senate race–and probably his political career as a whole–is over.