Colorado Pols Q&A: The State of the GOP Senate Race

Their campaigns were holed up in a Secretary of State’s office conference room today, poring over their ballot petitions as they prepare to file protests, likely on Monday…

The Secretary of State’s office will certify today to the county clerks the candidates for other races, such as state House, state Senate and district attorney. Clerks will be instructed to leave a blank space for the Senate candidates and will be notified as soon as possible when the Secretary of State’s office has a complete list of GOP hopefuls.

UPDATE 4:15PM: Ryan Frazier and Robert Blaha file for an injunction to prevent the finalization of the primary ballot:

This afternoon in Denver District Court, the Blaha for Colorado and Frazier for Colorado campaigns filed a joint petition seeking to enjoin the Secretary of State from setting the Republican US Senate ballot today as per the statutory deadline.

“I feel confident that this step will lead us to a positive outcome for our campaigns and for Colorado voters.The thousands of individuals that desire to see us on the ballot should be recognized and affirmed. I look forward to the real race once the ballot is set,” said Robert Blaha, who is represented by Michael Francisco of MRD Law.

“By taking this action today, I’m standing up for the thousands of voters that signed our petitions because their voice should count too. We are requesting the Secretary of State give our respective teams the time, allowed under law, to correct their action. I do so because we are confident we have more than enough validated signatures from real Colorado voters who want to have a choice in June.” Frazier is represented by Scott Gessler and Geoff Blue.

With this joint action, both Blaha and Frazier preserve their rights to file separate lawsuits challenging the insufficiency determination made by the Secretary of State’s office.

Today is the official deadline for the Colorado Secretary of State’s office to finalize the names that will appear on the June 28th Primary ballot, but with so many last-minute decisions about ballot access, it wouldn’t be a surprise if a legal motion delays that process.

To help you understand what is happening in the Republican Senate race, and what to expect next, we put together a nice little Q&A with ourselves. Enjoy: 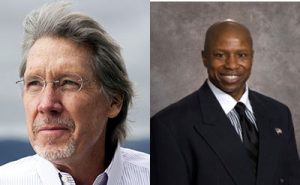 Q: The Republican field of candidates for U.S. Senate once included 13 different names. How many candidates will ultimately end up on the ballot for the June 28th Primary?

A: As of now, there are three candidates on the ballot: El Paso County Commissioner Darryl Glenn, former Colorado State University Athletic Director Jack Graham, and former half-term legislator Jon Keyser. Robert Blaha and Ryan Frazier learned from the Secretary of State’s (SOS) office on Thursday that they had failed to submit enough valid signatures for ballot access; Frazier is pursuing legal action and has hired former Secretary of State Scott Gessler as his legal representative, while Blaha has yet to announce whether or not he will challenge the SOS ruling.

Q: It was announced this morning that Keyser has successfully appealed his case and will be placed on the Primary ballot after all. What does this mean for Blaha and Frazier?

A: That’s a difficult question to answer when there is very little precedent here; prior to 2012, Colorado held its Primary elections in August, which left plenty of time to figure this out before ballots were finalized. Because Primary ballots are supposed to be completed by the SOS office today, Blaha and/or Frazier probably need to file some sort of injunction to stop that process from happening. We’d be surprised if there were no injunction filed today; Frazier hired Gessler to help him challenge the petition decision and seems to be fairly confident about his chances from what he has said publicly.

There are a lot of directions this could go from a legal standpoint, but it stands to reason that both Frazier and Blaha would benefit from the ruling in Keyser’s case. None of these three candidates submitted enough petition signatures to give them wiggle room if there were any problems – only Jack Graham was wise enough to turn in double the required amount of signatures – so if a judge is inclined to let Keyser on the ballot anyway, it would seem to create an opening for Frazier and Blaha to get the same shoulder shrug from a Denver judge.

Q: Is Keyser the frontrunner to win the Senate nomination?

A: Are you kidding? Of course not. Keyser supporters are celebrating their legal ruling as though his campaign accomplished something significant. In truth, Keyser did only what he was supposed to do: He made the ballot, and he had to file a lawsuit to do it. By failing to initially make the ballot, Keyser picked up more media coverage than he has had for his entire campaign – but all of it was bad. He now must convince potential Republican donors that his campaign is not already dead, despite what they may have seen or read earlier this week. That’s not a position of strength by any means, especially for a candidate who was already struggling to raise enough money just to keep the lights on.

Q: Okay, so if it’s not Keyser, then who is the frontrunner for the GOP nomination?

A: That’s an easier question: It’s the two candidates who didn’t have to spend the last week wondering if they were even going to be on the ballot in June. Colorado Republicans are going to be receiving their Primary ballots in the mail in 5-6 weeks, which isn’t much time for a bunch of unknown candidates to raise their name ID. Only Graham and Glenn have been able to campaign as full-fledged candidates for the last week or two, and both have a sizable advantage so long as they have the resources to run a solid campaign.

A low-information, low-turnout Primary certainly benefits Glenn, the man whose name will appear at the top of the ballot thanks to his victory at the Republican State Convention on April 9. But if we had to pick one name to be the favorite right now, it would be Graham; as of today, he is literally the ONLY Republican candidate whose name is on the ballot and has demonstrated an ability to generate significant campaign funds.