UPDATE: What does it mean when the losing candidate picks a running mate? 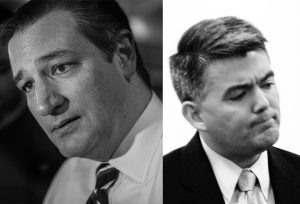 A marriage of convenience.

A press release from Ted Cruz’s presidential campaign today announces the endorsement of Sen. Cory Gardner of Colorado, who was left high and dry after his first choice Marco Rubio dropped out of the race:

“Ted Cruz has always been a fierce defender of the Constitution and a tireless advocate for conservative principles,” said Senator Gardner. “He has spent his entire career fighting for the men and women of this country and pushing back against the special interests in Washington. Ted is the only candidate who will change the way Washington works and restore the balance of power back to the American people. It’s time for Republicans to rally behind this campaign in order to put forth the best candidate to stop Hillary Clinton in November. I am confident Ted Cruz is that person and I’m thrilled to endorse him for President.”

“Cory has spent his time in Congress focused on improving the economy, creating jobs, and fighting for the people of Colorado,” said Cruz. “He has stood up and been a strong advocate for conservative principles like stopping the train wreck that is Obamacare and this dangerous deal the Obama administration struck with Iran. I am honored to have Cory’s support and look forward to working together to continue to coalesce Republicans around this campaign.”

Mutual admiration in today’s statement aside, Gardner’s endorsement of Cruz is just another sign of the desperation establishment Republicans are increasingly gripped with as frontrunner Donald Trump continues to win primary after primary. Before Cruz became the last hope to stop Trump, he had a reputation of being the least popular member of the U.S. Senate–a man with more influence among the “Tea Party Caucus” in the House than within his own chamber. That didn’t stop Gardner from invoking Cruz’s devotion to the cause of repealing Obamacare during his own run for the Senate, but Gardner has certainly fallen more on the establishment wide of the U.S. Senate GOP majority than Cruz’s since taking office.

And after Trump’s clean sweep of yesterday’s Northeast primaries, accelerating his pace to clinch the Republican nomination ahead of the party’s convention in July, Gardner’s endorsement looks like a “too little, too late” attempt to rehabilitate a loser.

Which is pretty much what happened with Marco Rubio.