UPDATE #3: The clock is ticking for Keyser to make this challenge. The deadline for the Secretary of State to finalize the Primary ballot is April 29th:

Keyser fell short by 86 votes in Colorado’s 3rd Congressional District, according to Colorado’s Secretary of State, which verifies the signatures. The district is represented by U.S. Rep. Scott Tipton, R-Cortez, and has 145,778 registered Republicans to 124,007 Democrats.

Keyser’s campaign is expected to appeal the decision and has five days to do so. The 16,067 signatures he submitted overall allowed him to clear the threshold in the six other districts…

If Keyser’s challenge is unsuccessful, his bid to unseat U.S. Sen. Michael Bennet, D-Colo., will end weeks before a single vote is cast in the June 28 primary — throwing an already chaotic race for Senate into further disarray.

“We wouldn’t put anything past Jon Keyser, including dishonesty,” said ProgressNow Colorado political director Alan Franklin. “This is the same Jon Keyser who claimed as a House candidate that he had received ‘two ballots’ for an election, when the truth is Keyser was lying–and he knew it the whole time. Keyser can’t blame our Republican Secretary of State for his own incompetence. It’s time for Keyser to do what he seems to have the most trouble doing: play by the rules, and respect our election system even when it doesn’t go his way.”

“Jon Keyser is the biggest nothingburger in Colorado politics, and it’s time to throw in the towel,” said Franklin. “Keyser promised to clear the field with his Washington, D.C. insider support, but he could barely raise enough money to keep the lights on. Now we learn his pay-to-play petition campaign also came up short?”

“In hindsight, Jon Keyser should have held on to his House seat,” said Franklin. “Keyser has a long way to go before he’s ready for prime time.” 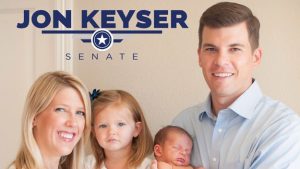 Jon Keyser will have plenty of time to spend with his young family now that he’s no longer a Senate candidate.

UPDATE: Keyser campaign says they will challenge, but this is a complete disaster regardless. Keyser came up 86 signatures shy in CD-3, and just barely got enough signatures in CD-1 (Denver) to get over the 1,500 threshold (he made it in CD-1 by just 20 signatures).

Just in from the Colorado Secretary of State’s office:

Keyser was required to gather 1,500 valid signatures from Republican voters in each of Colorado’s seven congressional districts for a total of 10,500 signatures. He came up 86 signatures short in Congressional District 3.

Keyser submitted 16,067 petition signatures to the Secretary of State’s office, which began a line-by-line review of the signatures. Of that 11,436 were deemed valid.

His campaign has five days to protest the decision.

We had a feeling this might happen after Republican Jack Graham made the ballot last week with a meager 56.6% “validity rate” on his signatures. Keyser’s campaign never did release a number on how many total signatures they collected — every other GOP candidate made sure to reveal a rough number when they first submitted signatures prior to the April 4th deadline. With four candidates competing to collect 1,500 signatures from each of seven congressional districts, there was always a strong possibility that at least one Republican would fail to qualify for the ballot.

Keyser can certainly challenge this decision, but as we wrote over the weekend, the former half-term state representative had an awful fundraising quarter and his campaign is running on fumes already.

Keyser’s campaign has been a raging dumpster fire since the National Republican Senatorial Committee (NRSC) first started flirting with the idea of making him their top recruit back in December. Perhaps it’s better that everyone just cut their losses on Keyser now.

Meanwhile, at the @NRSC, someone pulls up the CO line in Excel doc, hits DELETE, tabs over to NV. #cosen #copolitics https://t.co/XPodLoYwyI