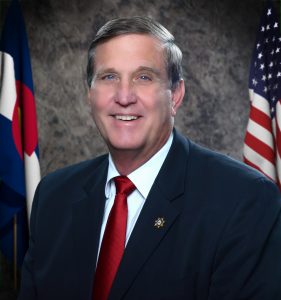 We took note earlier this week, as did gun safety activists, of remarks by Sen. John Cooke of Greeley during debate last week over Senate Bill 16-113–legislation that would repeal the state’s 15-round limit on gun magazine capacity passed in 2013. Sen. Cooke, making the argument that the magazine limit is not enforceable, explained that he tells his “people,” whom we assume to be his constituents to “go to Wyoming” to buy high-capacity magazines that aren’t legally sold in Colorado.

You can buy all you want up in Wyoming because they’re not illegal.

Which, while technically true, doesn’t make it any less illegal to bring those high-capacity magazines back into the state of Colorado from Wyoming once you buy one. Sen. Cooke is surely aware of this, since in his previous job as Weld County Sheriff he was responsible for patrolling a significant length of the Colorado/Wyoming border to prevent illegal fireworks being brought into our state. Any way you slice it, Cooke’s encouragement to break the law and (most importantly) advice on how to break the law is not appropriate for a lawmaker–and not okay from a former sworn law enforcement officer.

We’re happy to report that, in a hard-hitting editorial today, the Loveland Reporter-Herald agrees:

Crossing the border into Wyoming to purchase items that are illegal in Colorado happens all the time. Flying and exploding fireworks are illegal on this side of the state line, so Coloradans who believe that this state’s fireworks regulations are onerous regularly take the risk of driving over the state line and purchasing fireworks that they may legally possess in Wyoming. Bringing them back across the border is illegal, and any elected representative who would encourage his constituents to do so could lead them to run afoul of the law and common sense.

Cooke has been an opponent of gun control measures passed in 2013, to the point of saying when he was sheriff of Weld County that he would not enforce those laws. He was within his legal right to do so.

Choosing not to enforce a law is one thing, but encouraging people to break the law is beneath the office of a state senator. [Pols emphasis] It would be as if a legislator in Nebraska who disagreed with marijuana prohibition encouraged Nebraskans to make their purchases in Colorado and return home with them, as some of Cooke’s opponents have pointed out.

It’s true, and the Reporter-Herald does make the point that Sen. Cooke has a constitutional right to tell his constituents it’s okay break the law–and even how to do it. But a constitutional right to say something does not make it a responsible thing to say, and a lawmaker can reasonably be held to a higher expectation where it concerns basic respect for the law. We would say the same of law enforcement officers like Colorado’s elected county sheriffs.

We’re pleased to see some accountability in the local press. However you may feel about Colorado’s gun laws, and we know there are strong opinions here, lawmakers encouraging citizens to break laws crosses a line.