“Today, President Obama nominated Chief Judge Merrick Garland to the Supreme Court. Judge Garland has had a distinguished career as a judge and prosecutor, and has more federal judicial experience than any other Supreme Court nominee in history. He earned strong bipartisan support for his appointment to the United States Court of Appeals for the District of Columbia Circuit and throughout his career. He deserves to be considered, and I hope the Senate will honor its constitutional responsibilities. The United States Supreme Court has serious legal challenges before it. A fully functioning Supreme Court is of vital importance to this country.”

UPDATE #2: Sen. Michael Bennet weighs in in the affirmative via the Denver Post:

Senate Democrats, such as U.S. Sen. Michael Bennet of Colorado, have made the counterpoint that the Senate has the obligation to consider Garland as a candidate independent of the politics of the moment.

“Judge Garland has an excellent reputation and is eminently qualified,” said Bennet in a statement following the Rose Garden address. “I worked for and with him at the Justice Department and have a firsthand appreciation for his extraordinary legal skill and respect for the law.”

Gardner, a Republican representing Colorado, released this statement on Wednesday morning shortly after President Barack Obama announced his nomination to fill the vacancy on the Supreme Court: “We stand at a pivotal point in our nation’s history. The Obama Administration continues to use the judicial and regulatory systems to push through its legislative agenda, shifting the balance of power that our Founders established. That is why the next president of the United States should have the opportunity to fill the vacancy on the Supreme Court. In 1992, even then-Senator Joe Biden stated the Senate should not hold confirmation hearings for a Supreme Court nominee until after that year’s presidential election. Our next election is too soon and the stakes are too high; the American people deserve a role in this process as the next Supreme Court Justice will influence the direction of this country for years to come.”

“Judge Merrick Garland’s qualifications to serve on the Supreme Court are above reproach,” said ProgressNow Colorado political director Alan Franklin. “Despite all of the political posturing up to now, Cory Gardner has an obligation to give this highly qualified nominee a fair hearing. To refuse to even consider Judge Garland will just prove again that Gardner and his right-wing colleagues in the U.S. Senate have no interest in doing their jobs.”

“The people of Colorado are sick and tired of the dysfunction in Washington,” said Franklin. “If conservatives refuse to do their jobs and give Judge Garland a fair hearing, the voters will make them pay dearly for this last act of pointless obstruction against President Obama in November.”

That’s the breaking news from ABC moments ago: 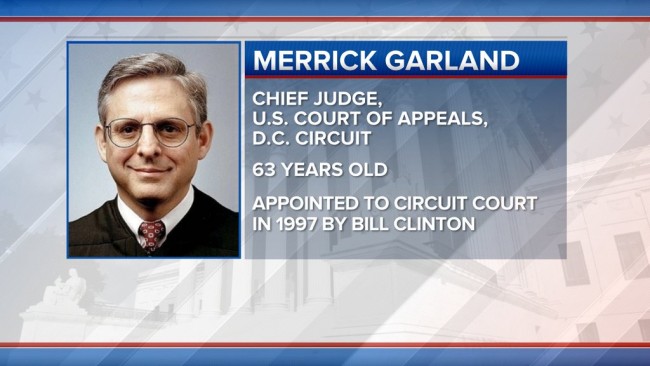 Garland, 63, is currently the chief judge of the U.S. Court of Appeals for the D.C. Circuit. A former prosecutor, he’s also viewed as a moderate. And he has cultivated a reputation for openness and collegiality at the D.C. Circuit, a bench that’s sometimes called the second most important in the land…

With Garland standing beside him, Obama recounted the judge’s bio, from his youth in Chicago to his sacrifices to go to college and law school — sacrifices, Obama said, that included Garland selling his comic book collection.

Before becoming a judge, Garland occupied top posts in the Justice Department, where he oversaw some of the biggest investigations of the Clinton era, including the Oklahoma City bombing, the Unabomber case, and the Atlanta Olympics bombing.