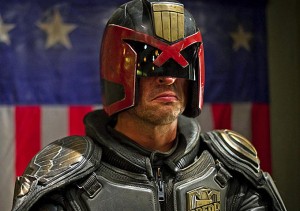 Judge Dredd is not really a judge…or a real person, for that matter.

According to local paper The Oregonian, the bunch of yahoos staking their claim on the Malheur Wildlife Refuge have now found themselves a self-proclaimed “United States Superior Court Judge.” Bruce Doucette has arrived from Littleton, CO, where he supposedly has “retired” as a “judge” to do computer repair work.

Doucette claims the Bundy Bunch have shown him “significant” evidence of crimes committed by the Federal government, and that he will certify the charges after they’ve been formally brought by a “grand jury” consisting of members of a local committee that’s been formed called the “Harney County Committee for Safety”.

All of this, of course, is udder cow-patty nonsense. There is no US official titled ‘Superior Court Judge’, and Doucette has no law degree nor even a lick of common sense. He does, however, have an interesting history as a “judge”. His name turns up on a number of Sovereign Citizen blogs and even news posts – always with the same “Superior Court Judge” title he’s claiming now.

He has appointed himself to defend Sovereign Citizen “Judge” Steve Curry of Montrose, who “filed” a $249 trillion “US gold dollar” lien against the American and International Bar Associations as well as the US Government. Curry was jailed for selling fake meteorites on eBay with claims that they were 80% tax deductible (and also making a supposed $58 million donation of “meteorites” to the local historical society) – not sure how the lien thing fit in with Doucette’s representation of him – the blog post was more interested in the so-called lien…

Doucette also offered to “represent” landowners in Costilla County this year over off-grid residency. He was brought in by another convicted thief (and child abandonment convict), Rodger Marsh, founder of a group called Operation Patriot Rally.

It’s not much of a surprise that the clueless yahoos currently involved in the armed takeover of Federal property in Oregon are aligned with the Sovereign Citizen movement. Even before this development they were “somewhere along the sliding scale” that leads toward the bamboozling Sovereign Citizens. Doucette’s arrival and acceptance by the group does little more than cement just how far down the scale they are…