Head by Coffman, Hair by Trump

Congressman Mike Coffman (R-Aurora) has been given plenty of opportunities to distance himself from the dangerous rhetoric of Republican Presidential frontrunner Donald Trump. As the National Journal reports, Coffman is now 0-for-3 on Trump questions:

Wow. Coffman isn’t just declining to comment on Trump — he’s running from the question like he’s late to a push-up contest. Why is Coffman so reluctant to criticize Donald Trump? As we noted a few weeks ago:

This has gone on for too long now. Coffman is taking such pains to avoid Trump questions that it’s fair to assume that he might just be part of the “The Silent Majority” backing His Hairness.

Remember, folks, that there is a long list of elected officials in Congress who have not hesitated to criticize Trump for his over-the-top rhetoric. Coffman has plenty of political cover to speak out against comments such as Trump’s suggestion to bar all Muslims from entering the United States…he just won’t do it. 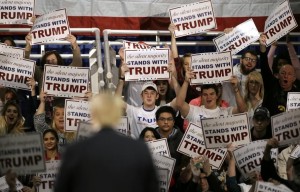