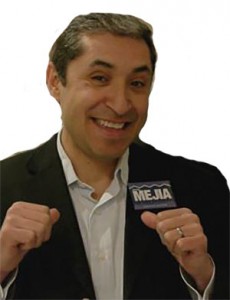 James Mejia (in the Democratic doghouse).

If there was ever a time in which the sudden push for a “fix” for Colorado’s arguably unbroken system of redrawing congressional districts we’ve seen in recent weeks made sense, that time is rapidly passing as questions about the timing and true purpose of a “bipartisan” ballot initiative grow. As the Colorado Independent’s Marianne Goodland reported Friday:

Initiative 55, as the measure is known, seeks to take the politics out of an inherently political process — the drawing of Colorado’s Congressional and legislative districts. The Congressional maps have been drafted by the General Assembly, with most of those efforts ending up in court for final resolution. State legislative districts are drawn by an independent commission that’s appointed by lawmakers and other state officials. Those results often end up in court, too.

The original language of Initiative 55 — submitted last month by former Speaker of the House Frank McNulty, R-Highlands Ranch and former Secretary of State Bernie Buescher, D-Grand Junction — triggered concerns that the measure would disempower voters of color, which the Voting Rights Act attempted to strengthen…

Ulibarri told The Colorado Independent that the language of 55 isn’t the same as other redistricting efforts that have been passed in other states, and that the fine print of the measure intends to break up communities of color and fracture their political voices. He has raised his concerns with the ballot measure sponsors McNulty and Buescher, and asked for a chance to be at the table for discussions about the language. That hasn’t happened. Instead, Ulibarri is being told to submit concerns to Mejia.

Former Denver Public Schools board member James Mejia is emerging as a major loser in this faltering effort, as it’s becoming increasingly clear that he is the “Democrat” primarily responsible for branding the proposal as “bipartisan.” It’s unknown how much Mejia has been paid by organizers of the ballot measure, but it’s hard to imagine the check was worth the loss of face Mejia is experiencing as fellow Democrats line up against him.

A key meeting Thursday organized by Sen. Jessie Ulibarri and other legislators seems to have sealed the fate of this proposal, at least in terms of it attracting any significant Democratic support in its present form. As of this writing, just about every stakeholder to the left of the Republican Party has seen the facts of how it could harm minority voters.

But beyond that, as the controversy grows over this proposal, its whole logical basis comes into question. Yes, the redistricting and reapportionment process in Colorado happened last time under Democratic control. But the current Republican majority making up Colorado’s congressional delegation and split control of the legislature between the two parties very straightforwardly demonstrates the lack of a problem with the status quo. The fact is, we have very competitive districts in Colorado. Our current process for drawing legislative maps gets testy at times, but the results would seem to speak for themselves. If you accept that, this whole business is a solution in search of a problem.

And when you ask the next logical question, why is it happening at all? James Mejia has no good answers.