The ability to instantly reach a vast audience of people via social media is becoming a real “kiss/curse” for some of the more radical Republican elected officials in Colorado following last week’s terror attack on a Planned Parenthood clinic in Colorado Springs. We’ve talked at length now about the angry screed from Rep. JoAnn Windholz of Adams County, in which she directly blamed Planned Parenthood for the attack on its own clinic. After that posting made national news yesterday, it was deleted–but the quite possibly fatal damage to Windholz’s political career had already been done.

Sen. Laura Woods, R-Arvada, who played a prominent role in the Nov. 9 hearing, posted a Guy Fawkes picture on her Facebook page two days after the attack that stated: “THE MIND OF A SLAVE ASKS IS IT LEGAL? THE MIND OF A FREE MAN ASKS IS IT RIGHT? ”

Fawkes was the 17th century English terrorist who attempted to blow up the House of Lords. The image was originally created by Alan Moore in his anti-government comic book V for Vendetta, which was later turned into a Hollywood blockbuster with a pro-violent-revolution undertone…

Woods did not respond to a call for comment. 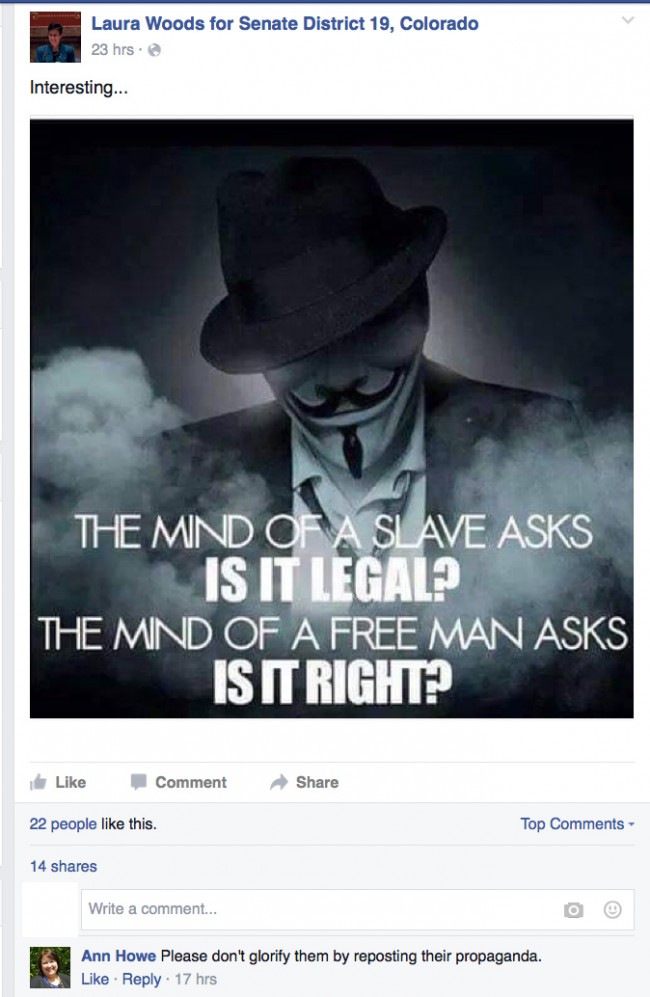 This post is somewhat cryptic in comparison to Windholz’s very direct accusations against Planned Parenthood, but the timing of the post invites obvious questions about what she meant. Woods is a stridently anti-abortion member of the Colorado Senate, and a regular participant in such activities as the Republican Study Committee of Colorado’s sham “hearing” on Planned Parenthood last month. Woods has a lengthy record of immoderate statements via social media since winning her swing SD-19 seat in 2014.

But perhaps most telling of all is that sometime after Goodland’s story yesterday, Sen. Woods deleted the post. And we’re pretty sure that wouldn’t have happened had it not been determined to be, you know, a liability.

Perhaps another reporter will be able to get Woods on the record, since she’s not returning Goodland’s calls.