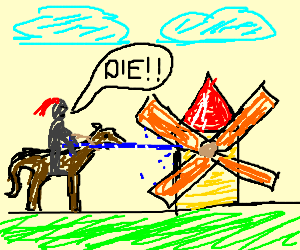 Prepare thyself, windmill, for Don “Quixote” Coram comes to do some tilting.

One way or another, a measure to require voter ID at the polls will be on the 2016 ballot, Rep. Don Coram said.

Coram, a Montrose Republican, announced Friday during a Montrose Chamber legislative preview that he intends to introduce a concurrent resolution in the Colorado House that would require identification from those voting in person on election days…

…Vote ID laws have been criticized by the New York Times and others as deliberate attempts to discourage or prevent voting among people who do not have money or means to obtain the necessary identification; a sort of backdoor poll tax.

“It’s a matter of safety,” contended Coram. “There are a few cases where (ballot) is returned to the county clerk because there is no person by that name at that address,” Coram said. “You can come in with a utility bill and say you want to vote.”

Voter fraud is not prevalent, he said. “But how much is enough?” [Pols emphasis] 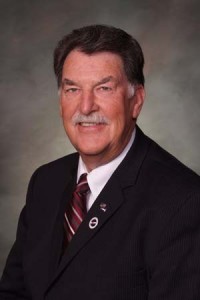 Boy, Rep. Coram sure sounds excited about combating voter fraud. He sounds so intent, in fact, that we almost hate to mention that there is still no evidence that voter fraud exists in Colorado AT ALL. Let’s revisit this November 11 story from the Aurora Sentinel:

An Arapahoe County jury last week acquitted a man of voter fraud charges, bringing to a close a 2013 voter fraud investigation that identified more than 100 suspects but produced just one conviction…

…The two men were among four charged in 2013 as part of a large-scale and controversial voter fraud investigation launched by former Colorado Secretary of State Scott Gessler.

Gessler had identified more than 100 people he said illegally voted, but the four charged in Arapahoe County were the only people in Colorado to face charges.

In early 2011, newly-elected Secretary of State Scott Gessler testified in Congress that some 16,270 people were illegally registered to vote in Colorado, and some 5,000 of them actually cast ballots in the 2010 election. Gessler wasn’t exactly “Captain Credibility” by that point anyway, but his out-of-left-field numbers of illegal voter registrations immediately raised eyebrows among politicos in Colorado and Washington D.C.

A few months later, Gessler inexplicably reduced that number by a significant amount, claiming to have narrowed the list down to 155 non-citizen voters. Then, in 2012, Gessler sent letters to 4,000 Coloradans he suspected to be illegally-registered to vote. Fast-forward back to November 2015, and you find that “1” is indeed the loneliest of numbers.

To recap, here’s the progression of the number of “illegal voters” in Colorado, per Gessler and his magic 8-ball:

Ever since Gessler first made his bold accusations in 2011, County Clerks from across Colorado have repeatedly denied that there were any known cases of voter fraud in their counties. Ever. At all. Undeterred, Gessler convinced his patsy, Arapahoe County District Attorney George Brauchler, to press forward with criminal charges that resulted in finding one person who was (knowingly) illegally registered to vote but likely never actually cast a ballot. Thank goodness we put a stop to that!

Colorado has spent an absurd amount of time and money over the last couple of years in an effort to discover this illegally-voting Bigfoot character, and at every turn Colorado has uncovered a whole bucket full of nothin’. Rep. Coram isn’t going to go out on another limb by throwing out new numbers attributed to illegal voters, so instead, he just says, “how much is enough?”

We were thinking the exact same thing, Rep. Coram. How much is enough indeed?