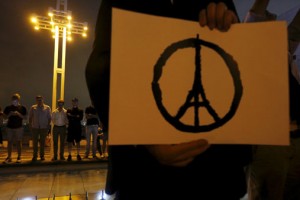 As the world comes to terms with the horrific terrorist attacks on Paris, France this past Friday evening, responses from Colorado Republicans run the gamut from level-headed to…well, not so much. We’ll start with a rare moment of praise for Sen. Cory Gardner, whose statement in the immediate wake of the attacks showed commendable restraint:

“The people of Colorado and the United States stand firmly beside our oldest ally, France. We mourn those lost and pray for their families. And we are united with all Parisians as they unite against this senseless violence.”

“This is what the world looks like without American leadership.” – @RepMikeCoffman on @FoxNews. #ParisAttacks #ISIS

Praying for Paris!! This attack happened BECAUSE of gun-free zone. Wake up America – will be here next! #Prayers4Paris #2A — Senator Woods (@SenLauraWoods) November 14, 2015

Don’t just #Pray4Paris, pray for America too. Only a matter of time before it hits our streets. Political correctness is killing innocents.

Really, please don’t get him started:

It should be noted that the latter outburst from Lockwood is apparently in response to President Barack Obama arriving a few minutes late for a moment of silence in honor of victims at the G-20 conference in Turkey. To characterize Mr. Lockwood’s reaction to that minor infraction as over the top is a considerable understatement.

It’s not our intention to belittle any genuine shock felt over the terrorist attacks in Paris, which given the nature of events there is to a significant degree completely understandable. We understand that an attack of this magnitude will certainly be a factor in many debates about American policy, and the role of Colorado politicians in shaping that policy. The number of current stories this event affects that we’ve been talking about in this space range from the debate over the threat posed by ISIS to the transfer of detainees from the Guantanamo Bay prison to facilities in Colorado.

But there is some rhetoric that, we should all be able to agree, simply does not help anybody.