Ryan Frazier is Running for Senate, For Some Reason

UPDATE #2: Local conservative blog Colorado Peak Politics is very excited about the diversity of the growing field of GOP Senate candidates–perhaps a bit too much so? Their post on Ryan Frazier’s entry into the race originally stated:

Since edited to read:

We assume because we stopped referring to African-Americans as “the blacks,” you know, several decades ago. This is the same blog that assigned the label “Hispanic” to a candidate from Calcutta, India last year, so we guess this racial stuff just isn’t their strong suit. 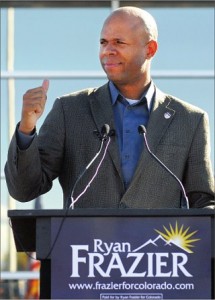 Who has one thumb up and no chance at winning a U.S. Senate race? This guy.

UPDATE: This is Ryan Frazier in a nutshell. His campaign announcement video says that “after nearly 8 years, Senator Michael Bennet has only made things worse for you.”

Politics is often a discussion about possibility and potential, largely because there are so few certainties that we can rely upon in our arguments.

And then there is Ryan Frazier.

The former Aurora city council member has reportedly decided to enter the Republican field for U.S. Senate in 2016, telling 9News that he will kick off his campaign with a video announcement on Thursday.

It would be hard to get too excited about his candidacy if you are a Republican, because we already know what happens when Frazier runs for higher office: He loses, badly. Frazier’s last two campaigns (CD-7 in 2010 and Aurora Mayor in 2011) both ended with double-digit losses, and 2010 was a very good year to be a Republican candidate.

Colorado Pols first reported back in August that Frazier was having discussions about a potential Senate run, but we were skeptical that he might really jump in the race; we didn’t think we’d ever see Frazier running for another office after his second consecutive drubbing in 2011. Here’s what we wrote back on Aug. 12 when we first heard that Frazier might be considering a run for Senate:

We don’t have many details on the “Frazier for Senate” rumor, but in some ways, it almost doesn’t even matter if the story is true or not. If anybody is seriously considering getting behind Frazier in 2016, it is a clear indication that Republicans are essentially conceding the seat to incumbent Democratic Sen. Michael Bennet.

Late last month, Frazier left his part-time “political analyst” position at 9News because he was apparently getting serious about the Senate race, but even then we had a hard time taking the story too seriously. Ryan Frazier is not good at running for office, and we doubt he could even win a Primary against state Sen. Tim Neville. Check that — Frazier will not beat Neville in a GOP Primary.

It is unclear who exactly is behind the idea of a Frazier campaign for Senate, but this isn’t going to end well for him.