Famous rich person Donald Trump, the frontrunner in the Republican Presidential Primary, has accused opponents Jeb! Bush and Ben Carson of being “low energy” for slightly different reasons. Bush has appeared to be a “low energy” candidate in large part because it seems like he doesn’t even want to be running for President. Trump goes after Carson, meanwhile, for his quiet demeanor and soft speaking voice. 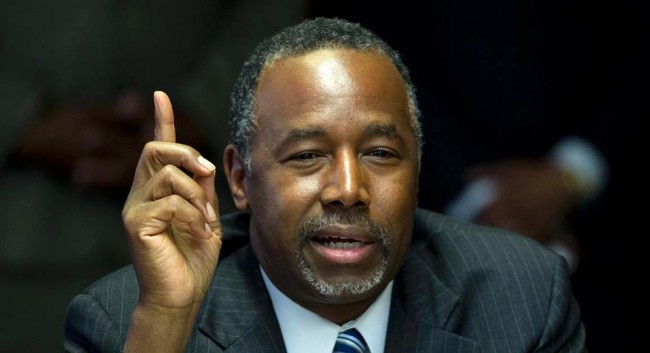 Ben Carson is soft-spoken and often appears to be half-awake…which are apparently virtuous traits to certain groups of Americans.

If Trump thinks that being loud is a virtue, he’d likely be perplexed by the reaction that Carson receives when he speaks to Evangelical Christians, as he did on Thursday in Colorado. On the morning following his lackluster debate performance in Boulder, Carson spoke to a largely conservative Christian audience at Colorado Christian University in Lakewood, and the practicing Seventh-day Adventist seemed right at home in such a religious setting. As John Frank reports for the Denver Post (all emphasis below is ours):

In his calm, assured tone — described by one prominent conservative at the event as Christ-like — Carson told more than 1,500 people at Colorado Christian University to “stop listening to secular progressives who are trying to kick God out of our country.”

We mentioned the “Christ-like” comparison earlier today in Get More Smarter, but there’s a lot more here that is worthy of further examination. We’re talking about the same guy who has admitted that he tried to stab a friend to death, failing only because the victim was wearing an oversized belt buckle. Carson may be trying to play up his religious bonafides by confessing his sins, though whether or not he is absolved from attempted murder shouldn’t make anyone feel better about supporting Carson for President.

Positioning himself as a “citizen statesman,” the candidate used his faith to separate himself from the other outsider candidates — notably Donald Trump — and dismissed concerns about his lack of political experience.

“The Ark was built by amateurs, the Titanic was built by professionals,” he said to raucous applause from the crowd in a packed gymnasium on campus.

Every political hack in the world will tell you that successful politicians find a way to turn their weaknesses into strengths. But Carson’s lack of experience isn’t a weakness — it is a glaring and unmistakable hole in the resume of a man who wants to become the leader of the free world.

Carson tries to get around this problem with his analogy about The Ark and the Titanic, but the comparison is a more than a bit stark. Is Carson really implying that America would be better off choosing a candidate for President who has no political or governing experience whatsoever? Or is he just saying that Noah should have been consulted on the blueprints for the Titanic?

His message is one that resonates in Colorado, where evangelical conservatives represent a significant bloc in Republican politics.

The state’s faith-based community pushed Rick Santorum, the former Pennsylvania senator, to victory in the 2012 GOP caucus and Carson tapped the same vein to win the past two  annual straw polls at the Western Conservative Summit in Denver, which is hosted by the university’s conservative-leaning think tank.

There isn’t a Presidential candidate in either Party that won’t require some degree of nose-holding when voters make their choices. This is the state of American politics, and it’s probably unavoidable. But in order to vote for Carson, you’d need to hold your nose, cover your ears, and put a patch over one eye.

Even if you are willing to take a chance on a candidate with ZERO political experience, how do you overlook Carson’s ever-growing list of questionable statements and beliefs? Carson is entering politics with the top job in the land as his target, which seems a tad ambitious until you consider that somebody this outrageous would likely have a more difficult time trying to consolidate votes for Governor than President.

Carson needs a larger voter base so that he has a greater chance of uncovering supporters who will ignore what he says, but call him “Christ-like” because he spoke in a quiet voice.