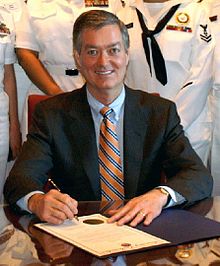 Jeb Bush’s inability to break from the pack of Republican presidential candidate is drawing plenty of attention in Washington. But former Colorado Gov. Bill Owens said Bush is in a “good place right now.”

“He’s well-funded. He has an organization that is strong in many, many states because of himself and his family,” Owens said in an interview Wednesday. “This process has a long way to go.”

Owens endorsed Bush earlier this week and will serve as a campaign co-chairman in Colorado, along with State Treasurer Walker Stapleton.

Both Republicans have strong ties to Bush…

As Jeb! Bush’s second cousin, Colorado Treasurer Walker Stapleton’s role in Jeb!’s campaign is an all-in-the-family no brainer. Likewise with former Gov. Bill Owens, a Texas native who as Frank reports worked for Jeb! way back in the 1970s.

We are thrilled to be #AllinforJeb! Keep an eye out for some exciting upcoming events! #copolitics pic.twitter.com/ElzwRQpA1b

The beatific smile on the left is courtesy Monica Owens-Beauprez, Gov. Bill Owens’ daughter and one of the principals at the recently-formed WestBrooke Group. The WestBrooke Group is a political consultant shop that, and we don’t necessarily mean this in a bad way, essentially exists to trade on Monica Owens-Beauprez’s surname(s). We understand they’re reasonably adept at setting up fundraisers and other events in posh locations–and of course, that incredibly important skill political insiders everywhere depend on, “networking!”

But as we all know, it’s mostly about the surname(s).

Anyway, we think it’s an important addition to this story to note that Jeb! endorser Gov. Bill Owens has immediate family members on Jeb!’s payroll. It seems likely that the Republican grassroots in Colorado, which is by most reports not terribly keen on Jeb! to begin with, will appreciate that fuller context.

And that’s before you remind them about Referendum C.