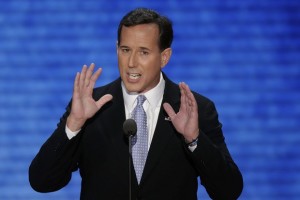 Colorado Republicans have enacted “The Santorum Rule” for 2016.

Confused? You should be. Colorado is currently the only state in the country where Republicans are essentially taking a pass on participating in the early nomination process, in large part because there are too many bad Republican candidates for President. As John Frank reports for the Denver Post:

Colorado will not pick a Republican candidate for president in its 2016 caucus after party leaders approved a little-noticed shift that is likely to diminish the swing state’s clout in the most open nomination contest in the modern era.

The GOP executive committee voted Friday to cancel the traditional presidential preference poll at the caucus after the national party changed its rules to require a state’s delegates to support the candidate that wins.

What in the name of Ronald Reagan’s ghost is going on in Colorado? There is some actual logic behind Friday’s decision — though not necessarily good logic:

State Republican Party Chairman Steve House said the party’s 24-member-executive committee made a unanimous decision — six members were absent — to skip the preference poll. He said the move would give Colorado delegates the freedom to support any candidate eligible at the Cleveland convention in July. Republican National Committee officials said the change complies with strict party rules.

“If we do a binding presidential preference poll, we would then pledge our delegates … and the candidates we bind them to may not be in the race by the time we get to the convention,” House said in an interview Tuesday. [Pols emphasis]

You might call this “The Santorum Rule,” the result of a strange 2012 cycle whereby former Pennsylvania Senator Rick Santorum somehow ended up with the support of the Colorado delegation not long before his entire campaign cratered. The solution to this problem, according to House and other Republicans, is to skip the “preference poll” part of the GOP caucus so that Republicans don’t feel compelled to support a campaign that no longer exists by the time the Republican National Convention convenes in late July.

In other words, Colorado Republicans don’t want to be forced to select — and continue to support — a bad candidate in a field of bad candidates. There is some disagreement about whether or not this will cause Republican candidates to largely avoid Colorado through 2016; you could argue that Republicans will actually work harder in Colorado in order to make sure that they hold on to delegates who could change their mind at any time.

The upside, if you can call it that, is that Colorado Republicans could wield a lot of power if the 2016 GOP nomination comes down to a brokered deal at the National Convention. Of course, we haven’t seen a brokered convention in this country in more than 60 years, and the likelihood that it will happen in 2016 is about as probable as Donald Trump growing a new head of hair.

The Colorado Republican Party has had an odd year in 2015. They elected Steve House as their new State Party Chair in March, despite a fairly successful 2014 election cycle under Ryan Call; three months later a group of GOP leaders, including Attorney General Cynthia Coffman, tried to blackmail House into resigning from the job (and as it turns out, efforts to oust House probably began on the very day he was first elected). Republicans continue to insist that incumbent Sen. Michael Bennet (D-Denver) is beatable, yet they can’t find anybody to actually run against him in 2016. Oh, and don’t forget…this?

When viewed with the proper amount of perspective, perhaps it shouldn’t be a surprise that GOP leaders decided against participating in the 2016 Republican Presidential Primary…