UPDATE: We’ve posted a few clips from last night’s Castle Rock town council meeting after the jump. You can watch Castle Rock’s city manager and another town employee warning of the consequences of refusing the CDBG grant money on existing recipients in Castle Rock. Then you can watch Castle Rock’s mayor decry the fact that organizations in his town are “dependent” on the federal government. Finally, a council member argues in favor of refusing the grant money, saying “let’s feel that pain.”

We can think of a few terms to describe this, but “responsible” isn’t one of them.

The Douglas County GOP warned of United Nations mischief afoot in a Tweet yesterday, right in their own hometown: 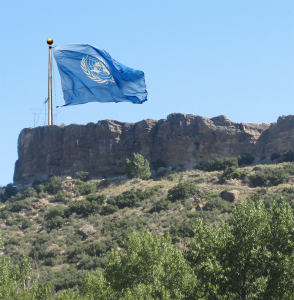 That’s right, folks! Those gun-grabbing social engineering commies at the United Nations have set their sights on the God-fearing town of Castle Rock, Colorado. Castle Rock as part of “urban” Douglas County has already been receiving Community Development Block Grant (CDBG) funding from the federal government, but the town has grown enough to qualify for CDBG funds on its own. Now you’ll have to stick with us for a moment, because the path from a federal grant to totalitarian United Nations control of the sovereign citizens Castle Rock is a little convoluted–and not terribly evident in the list of potential uses for the funds in question:

Along with other projects like upgrading parks and community centers, storm sewer maintenance, fire truck lease payments, and Americans with Disabilities Act (ADA) compliance work in downtown Castle Rock. The biggest change is that Castle Rock’s local grant recipient programs would apply to the town, not Douglas County, for these funds.

Can blue-helmeted stormtroopers in the streets of Castle Rock be far behind? 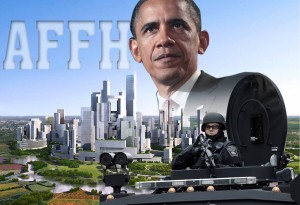 We faced federal overreach in Castle Rock tonight. The feds sent our town council a letter mandating that they choose whether or not to take obligation-ridden (AFFH aka: Agenda 21) funds (only $212k). These came at the low price of having to accept federal direction on the growth of our town and becoming further subjects to federal intervention. Thank you to our Council, save one, who voted to not only turn away this offer but any other obligated funds. A special thanks to Council Members Jennifer Green, George Teal and Mayor Paul Donahue for your defense of our town’s right to self-govern.

And with that, Castle Rock is safe for another two years from preschool scholarships and money for their senior center! It’s true that the threats to our sacred American freedoms sometimes don’t seem all that threatening. Heck, sometimes it looks, well, a little crazy to take a stand for the flag, the Constitution, and the sacred chastity of our teenage daughters.

But that’s the moment when Real Americans® set aside logic, proportion, common sense, whatever you city folk want to call it, and do what has to be done.