The Dropout Clock: How and When the GOP Presidential Field Thins Out 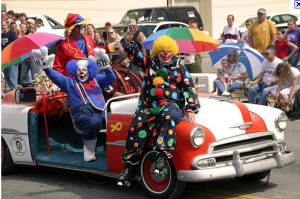 There’s an interesting story today in The Hill attempting to predict which of the 17 Republican candidates for President will still have active campaigns by the first-in-the-nation Iowa caucus on Feb. 1, 2016.

From The Hill’s perspective, there are 7 Republican Presidential candidates who might not make it to the Iowa caucus: Rick Perry, Rand Paul, Bobby Jindal, Rick Santorum, Lindsey Graham, Jim Gilmore, and George Pataki. The Hill is making the prediction here that Carly Fiorina could have some staying power after only making the Junior Varsity team for the first GOP Presidential debate, in effect replacing Rand Paul in the top tier of contenders.

With The Hill story as inspiration, we decided to start our own feature here on Colorado Pols. We’ll call it (for now) “The Dropout Clock” as we attempt to forecast the end of the line for the bottom tier of contenders.*

*Yes, we know it’s early. Yes, we remember how John McCain nearly bankrupted his 2008 Presidential campaign before recovering to win the GOP nomination. Yes, we understand that the rise of “Super PACs” has changed the way the game is played.  This is just our best guess, with the current information at-hand, of how the 2016 field will begin to thin on the Republican side.

We’ll break this up into a couple of categories, with numbers assigned to individual candidates representing when we think they’ll bow out of the race. This is one list where being #1 is not good news. Click after the jump to get started.

Please Make Your Way Toward the Exit

Things have not gone well for Paul since his official campaign announcement in early April. Fundraising and polling numbers are on the decline, and a recent federal indictment of two of Paul’s top supporters — including the guy in charge of the Paul Super PAC — were indicted by the Justice Department for alleged illegal campaign work in 2012.

Yet with all of these problems, Paul should still have enough national stature to remain in the Presidential race for some time…right?

Maybe, but here’s where things get tricky — and the main reason we think Paul could be the first Presidential candidate to exit the stage on the GOP side: Paul may soon have to choose between running for re-election and running for President in 2016. Paul and his supporters have been lobbying Kentucky Republicans to change their bylaws to allow him to run for both the Senate and the Presidency at the same time, with a looming deadline of August 22 to make the necessary changes. If Kentucky Republicans do not accommodate Paul, he’ll face increasing pressure to publicly declare his intentions for 2016; the way things look today, Paul would be foolish to not seek re-election to the Senate so that he can live to run for President another day.

#2: Former Texas Gov. Rick Perry
Once upon a time Perry was a rising national star who seemed destined to make a big run at the White House…and then he started talking. Perry has a lot of true believers who still think the two-time Texas Governor can make a run at the title, but his campaign is running out of money and he recently stopped paying staffers in Iowa, New Hampshire, South Carolina…and even at his Austin headquarters. Unless he can do something to give his campaign a jolt in the next couple of weeks, the wheels are just going to fall off altogether.

#3: Former Virginia Gov. Jim Gilmore
Gilmore waited until late July/early August to make his Presidential aspirations official, and his late start has made it difficult for him to gain a foothold in the media (or anywhere else, for that matter). Gilmore’s polling numbers are so low that he was not invited to September’s CNN debate — even if CNN continues with the two debate tiers that Fox News initiated — and his fundraising has been predictably weak.

Nevertheless, Gilmore isn’t facing any real pressure to drop out of the race, and since he’s only been an official candidate for a few weeks, there’s no rush for any sort of decision. Gilmore almost certainly will exit the race at some point in the near future, but he might need to first concoct a story that will limit his embarrassment.

#4: Louisiana Gov. Bobby Jindal
Jindal may have been the least-impressive candidate in the first Junior Varsity debate, which is saying something in itself. It’s difficult to envision the scenario whereby Jindal gains enough momentum and support to still have a functioning Presidential campaign in February 2016. Unless Jindal can quickly convince aggrieved conservative Christians that he is their guy — which seems to be his strategy — there won’t be enough resources to sustain his bland personality. Jindal probably won’t be the first candidate to exit the race, but he won’t be far behind.

Thinking More About How to Exit than How to Continue

#5: South Carolina Sen. Lindsey Graham
Graham’s real purpose for running is to be “The Defense Hawk” in the field, making sure that foreign policy issues remain a top priority while perhaps positioning himself for a top job in a future Republican administration; fortunately for Graham, he already has his narrative in place for exiting the race. Graham could hold on for awhile and hope that a big foreign policy issue emerges that can vault him into the top tier, but he’s not raising much money, his polling is abysmal — he’s running sixth in his own state of South Carolina — and he looked uncomfortable in the Junior Varsity debate. If Graham can’t crack the top tier in the next month or two, he’ll likely start thinking about when to bow out and save face.

#6: Former New York Gov. George Pataki
It’s difficult to predict when Pataki might exit the Presidential race, in large part because it’s so hard to understand why he jumped into the field in the first place. Pataki’s polling and fundraising have been terrible, and there’s no obvious slot where his particular expertise (whatever that may be) allows him to carve out a niche position. But Pataki is also in a similar position as Jim Gilmore in that nobody is really trying to get him to exit the race, so he might just keep running for awhile until he finds an opportunity to sneak out the back door.

So You’re Saying There’s a Chance…

#7: Former Pennsylvania Sen. Rick Santorum
Santorum just recently named his New Hampshire state director, and supporters say that he plans to significantly increase his Iowa staff. Things are not trending well for Santorum, but he won the Iowa caucuses in 2012 and hung on to finish second in the GOP field that year, and he appears to be gearing up to take one more shot at rising into the top tier. Because of his prior success in Iowa, Santorum will likely try to keep the engine running until Feb. 2; whether he can find the resources to keep campaigning for another 6 months is the key. Santorum probably won’t exit the race until he feels like he has no other choice, so we’d expect to see his campaign continue into the holidays unless he can find a way to leapfrog half of the field.

What say you, Polsters? Who will be the first GOP candidate to exit the 2016 Presidential race?