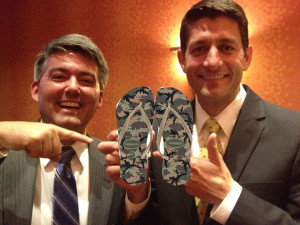 Including Colorado’s junior Sen. Cory Gardner, for whom the issue of voting to defund Planned Parenthood is stickier than most, after successfully outflanking attacks on his anti-choice record in last year’s elections:

Planned Parenthood Colorado Votes called out Republican Sen. Cory Gardner of Yuma for voting to defund the organization, which provides many other women’s health services besides abortions. Cathy Alderman, the organization’s vice president, said Gardner “should be ashamed of himself.”

Like we said last Friday discussing this vote, there’s nothing in the videos released by abortion opponents so far that points to any actual wrongdoing by Planned Parenthood. Clinics are allowed a reasonable repayment for handling tissue donations under federal law, and the medical research carried out using donated fetal issue is both vital and (until now) relatively uncontroversial.

But in rushing to vote to defund Planned Parenthood, even before the various GOP-led and presumably biased inquiries are complete, Gardner and friends have proven that these videos are just a pretext–to do what this organization’s longstanding enemies would do anyway and have repeatedly voted to do. This vote is a validation of the “War on Women” theme that Republicans have desperately tried to discredit in recent years. The political advantage gained by firing up the conservative base is undone, and then some, by demonstrating to independents and Democrats that their fears about the GOP’s true agenda on this issue are justified.

In the absence of evidence that any law was broken, and with over a year until the next election to allow cooler heads to prevail, we believe Republicans are seriously harming themselves politically–reversing gains they had made in appealing to women voters last year.

And we’ll say it again: every time Gardner votes to attack women’s reproductive rights–and this won’t be the last before 2020–he is discrediting the entire local pundit class who pompously told women voters that concerns about Gardner’s record on the issue were overblown. From the Denver Post’s editorial board who claimed Gardner’s election “would pose no threat to abortion rights” to local talking heads like Floyd Ciruli and Eric Sondermann who helped manufacture the negative impression of Democrats’ “one issue campaign” against Gardner, there are lots of people today who should be embarrassed to show their face.

Then again, Dick Morris still gets face time for some reason.