From the very beginning, the Coffmangate Scandal has been a right-on-right slugfest of competing accusations with varying degrees of vitriol. Numerous Republicans have simultaneously tried to downplay the growing story while also making sure to sneak their own jabs into the commentary, and a new post today from the right-wing blog Politichicks makes it clear that none of the individuals involved have any plans of backing down from a fight that has already ended the political career of Attorney General Cynthia Coffman and threatens to do much more damage before all is said and done.

“The House scandal continues to hold momentum in Republican circles as grassroots activists decry the lack of information that came out of the executive committee meeting.”

– “Behind Closed Doors in the CO GOP: From Bedrooms to Boardrooms,” Politichicks.com

Last week, Ben Terris of the Washington Post penned a 2,400-word front page feature story on Coffmangate detailing the strange saga that has gripped GOP activists for more than a month. Cynthia Coffman refused attempts to comment for the Washington Post story, but the embattled AG apparently decided to give an “exclusive interview” to the Politichicks blog for a story titled, “Behind Closed Doors in the CO GOP: From Bedrooms to Boardrooms” in which she complains about everything from GOP Chair Steve House to air conditioning and a scarcity of chairs at an Executive Committee meeting.

Jason Salzman wrote an earlier post on ColoradoPols.com about the Politichicks story and Cynthia Coffman’s apparent claims that she still has a long list of grievances involving House and others. But the Politichicks blog post is so chock-full of oddities that it deserves another look. Before we get into some of the details of From Bedrooms to Boardrooms, let’s rehash why this story is much more interesting than just a firestorm of Republican infighting…

There are numerous plotlines involved with the Coffmangate Scandal, which makes it easy to veer off in a new direction at any given time. But the crux of the story is about Cynthia Coffman and the potential fallout hitting her husband, Rep. Mike Coffman (R-Aurora). Cynthia has been accused of playing a key role in what House has called an attempt to blackmail him to resign as Republican State Party Chair. The stories told by House, Cynthia Coffman, former Pueblo GOP Chair Becky Mizel, and former Congressman Tom Tancredo all seem to agree on one thing: That a small meeting was held on June 15th with the intention of trying to get House to resign from the position he was elected to serve on March 14th. 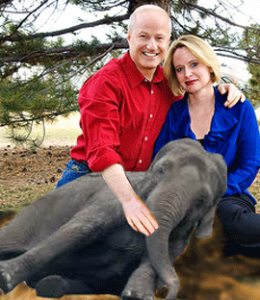 The Coffmans pose with the elephant in the room.

We continue to hear that a federal investigation is underway in the Coffmangate Scandal. Based on the information that has already been made public, it seems inevitable that Coffman will ultimately be forced to resign as the state’s top law enforcement official; at the very least, Cynthia’s ability to serve as AG has been compromised by her involvement in the alleged blackmail scheme. As Lynn Bartels wrote last week for the Denver Post, Congressman Mike Coffman is inevitably going to be caught up in the Coffmangate net — particularly since Cynthia has publicly talked about how often she and Mike discuss politics and strategy in private. As we wrote last week:

There has been no indication thus far that Mike Coffman was at all involved in the ill-planned coup attempt against House, but a cloud of suspicion and cover-up will continue to follow him around like he was Charlie Brown, and he has no good options for avoiding the storm.

National Republicans are already keeping their distance from the Coffman clan, which is certainly playing a factor when it comes to local GOP attempts at re-framing the scandal with Steve House as the Problem-in-Chief…which leads us back to today’s strange Politichicks story. Follow along after the jump as we dig in “From Bedrooms to Boardrooms”:

(Excerpts below from Politichicks.com post From Bedrooms to Boardrooms.)

A sweltering boardroom with no air-conditioning, no cold water, and no lunch during a six hour meeting.

The Politichicks story begins with this stage-setting lede, details of which soon become a central theme as part of an argument that people were mean to other people.

…House claimed the fateful meeting was over his refusal to hire Harvey, but Coffman never wanted him on staff [Pols emphasis]. Several insiders corroborated Coffman’s opposition to Harvey being employed by the state GOP.

So, we’re back to Ted Harvey? We’ve written before about the controversy surrounding the former state senator and current chair of The Stop Hillary PAC (which has been accused of being a scam-PAC). We’ve always known that Harvey’s interest in a full-time job with the State GOP was a primary factor in the creation of the Coffmangate scandal, but it is interesting to read Politichicks talking more about “alleged slanderous statements” made about Harvey — as though saying bad things about Ted Harvey should be a cause for dismissal in and of itself.

Perhaps of more interest here, this is the first example we can recall where claims are made that Cynthia Coffman was never a proponent of hiring Harvey as the Party’s Executive Director. Remember, here, that Coffman has ZERO authority on hiring decisions at the State Party.

According to Tancredo, the meeting addressed a litany of concerns including the type of character assassination that could bring untold financial liability to the party. Tancredo said that House slandered Harvey in front of radio personnel and party leaders. The allegation: Statements by House that he feared Harvey would embezzle money from the state party due to Harvey’s impending divorce and bankruptcy proceedings. But there was no divorce and no bankruptcy.

House’s alleged statements were filled with lies. There was no reason to fear embezzlement.

You’ve gotta love that last line. Politichicks is defiant that something that House may or may not have said was a bunch of lies anyway. What if the “alleged” comments prove to be untrue? Was House still lying about something he didn’t say?

A woman came forward shortly thereafter confessing to an adulterous relationship with House.

Colorado Pols has the original audio recording of this “confession.” The recording completely refutes the claims of this woman, and in fact does more to indicate that there was an elaborate plot to force House to resign as State Party Chair.

Prior to their vote of confidence, the executive committee held a vote to not allow a secret ballot on House’s ability to lead the party. Inside sources state that the committee voted 11-8 to hold an open vote—suggesting that if votes had been cast by secret ballot, they would have reflected a more divided committee.

So, the only reason that Steve House received an overwhelming vote of confidence from the GOP Executive Committee is because they were not allowed to cast secret ballots? Uh, you’re not really helping here, Politichicks.

The post moves on to describing, in excruciatingly-pointless detail, the “physical environmental challenges” at the June 26th Executive Committee meeting. Apparently there was no cold water available. There was no food offered. At one point, Cynthia Coffman was forced to — GASP! — sit on the floor because there were not enough chairs available.

In an exclusive interview with Politichicks, Coffman broke her silence and exposed a stunning disregard for decorum in its treatment of both elected officials and party activists by the executive committee. Inside sources provided additional details, corroborating Coffman’s account of events.

Wait, we’re arguing about “a stunning disregard for decorum” now? Nevermind that the Colorado Attorney General appears to have been involved in an attempt to blackmail the State Party Chair — what’s really important here, if you ask Cynthia Coffman, was the unforgivable absence of water and chairs.

Coffman estimated that is it was in the high 70s to low 80s in the hallway—others in attendance described the temperature as sweltering. She was told the air conditioning was out because of a lightning strike the previous day. Executive committee members went in and out periodically to use the restroom or get a drink.

And how did the waiting area smell? What about car traffic to and from the venue — how was that?

Why are we talking about this?

The committee limited Coffman’s comments, halting her from presenting her prepared remarks in their entirety. “I was given five minutes to speak and five minutes for questions,” Coffman said…

…“I galloped through my prepared chronology of events but was not able to finish in five minutes. I felt I had to leave out significant facts,” Coffman said.

Really? Because there’s only one “significant fact” that comes to mind: Did you participate in an attempt to blackmail Steve House? Is there some sort of viable defense for participating in blackmail, but only for a good reason?

In addition to the attempt to prevent the attorney general from speaking, the committee was successful in stymying former US Congressman Tom Tancredo and Pueblo County Chair Becky Mizel. When the group was ready to call Tancredo, he was outside the building seeking refuge from the sweat filled hallway. Sources state that Hoffman refused to allow Tancredo to be called into the meeting by phone or text.

We are talking about Tom Tancredo here. Nobody in the history of Colorado politics has ever had a problem finding Tom Tancredo when it is his turn to talk about something. The story we have heard, meanwhile, is that Tancredo just seemed to vanish whenever it was his turn to speak “on the record.”

“I do not feel I or any of my colleagues were treated respectfully that day. I am not sure there is another of my AG colleagues in the country who would have waited under the same circumstances. I will simply say the excom appeared to be unsure of its authority, process, or purpose,” Coffman said.

Let the record show that Cynthia Coffman exhibited extreme bravery in overcoming both a lack of cold water and a dearth of chairs in the building. By the way, was Cynthia Coffman on the clock during the entire Friday she spent sitting (or not sitting) waiting to talk to a Republican Executive Committee that has absolutely nothing to do with her full-time job as Attorney General?

The House scandal continues to hold momentum in Republican circles as grassroots activists decry the lack of information that came out of the executive committee meeting. [Pols emphasis] There has been talk about petitioning the issue before the GOP’s State Central Committee which would be public and open to the press. As of yet, a petition has not been circulated.

Did the executive committee’s vote of confidence send an unintended message that it is permissible in the GOP to spread lies about elected officials? Is it acceptable to malign reputations through false claims of blackmail—only to flip-flop in the name of party unity?

What? So, Steve House invented a blackmail scandal that forced him to publicly dispute claims of his own extramarital affair? That makes…absolutely no sense whatsoever.

We almost can’t wait to see what they come up with next.