Marriage Equality The Law of the Land

SATURDAY UPDATE: Last night’s celebration at the Colorado Capitol was fittingly historic in itself, photo courtesy One Colorado: 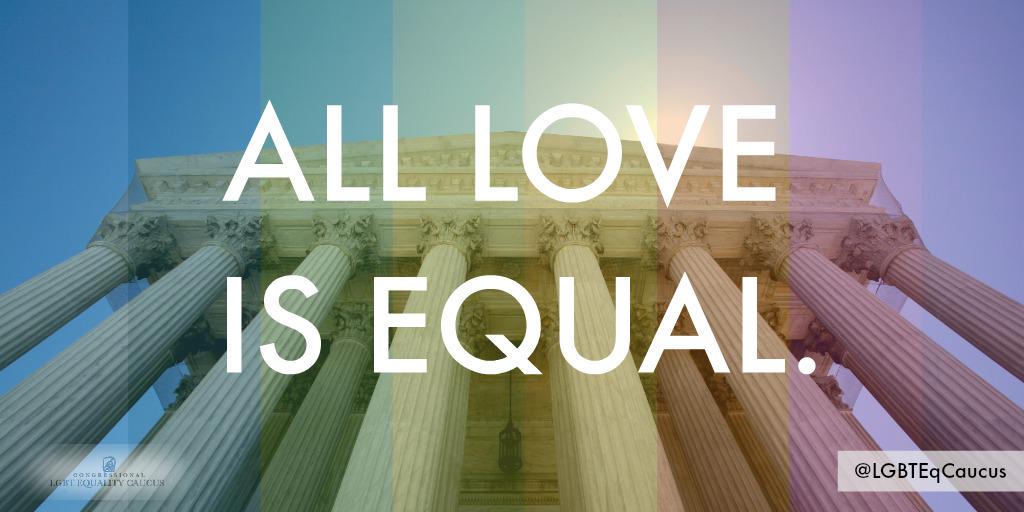 “’Justice delayed is justice denied,’ and today – finally – the delay is over, and all loving families have the right to marriage. It is about time!” said Sen. Morgan Carroll, D-Aurora, Senate Democratic Leader. “Today we should honor those who fought for equality before us, but sadly aren’t here to see the outcome of their struggle. And we should also celebrate the fact that love finally won. Love will always prevail over hate and intolerance. What a great day for all Americans!”

“The Court has brought the finishing touch to the long journey for equality in marriage,” said Sen. Lucia Guzman, D-Denver. “On the Eve of our country celebrating our freedom, may we all stop for a moment and give thanks to all who have fought the great battles for Justice.”

“Colorado Democrats have been fighting for equality for the LGBT community for a long time,” said Speaker Dickey Lee Hullinghorst, D-Boulder. “Today’s decision in the Supreme Court affirms what I’ve known since this fight was just getting started: no matter how long it takes, no matter how hard it gets, no matter what the opponents of equality throw in our way, in the end, love wins.”

“In the 90’s, Colorado was called the ‘hate state’ with the passage of Amendment 2,” said Rep. Paul Rosenthal, D-Denver, co-chair of the House LGBT Caucus. “Since then, we have acted quickly and broadly on LGBT equality. Colorado set the table and helped shape the debate that led to today’s Supreme Court decision, and I couldn’t be more proud to have been a part of it.”

“From designated beneficiaries to two-parent adoption, the Colorado Anti-Discrimination Act, to civil unions and today’s decision, Colorado has been on the right track for LGBT individuals and families for a long time,” said Rep. Joann Ginal, D-Fort Collins, co-chair of the House LGBT Caucus. “I’m proud to have been part of the caucus to sponsor and pass the Colorado Civil Unions Act in 2013, and today’s decision finally gives all Americans the right to marry who they love.”

“Finally, every loving couple in the United States may choose to express their commitment in marriage and be assured of its legal benefits and responsibilities. This is a proud moment in our ongoing march towards full equality.

“I was particularly touched by Justice Kennedy’s observation about the children of same sex couples, who have borne the burden of the inequality of their parents’ relationships, observing:

‘[e]xcluding same-sex couples from marriage thus conflicts with a central premise of the right to marry. Without the recognition, stability, and predictability marriage offers, their children suffer the stigma of knowing their families are somehow lesser. They also suffer the significant material costs of being raised by unmarried parents, relegated through no fault of their own to a more difficult and uncertain family life.’

“I have proudly officiated services for same sex couples, and I have my minister’s license ready to perform more.”

“The road to LGBT equality in America has not been an easy one. From the Stonewall riots in 1969, to an epidemic that killed hundreds of thousands of gay men; from a Supervisor assassinated for refusing to blend in, to a Wyoming college student beaten to death for his sexual orientation, that road has been paved with far too many tragic days.

“Today is not one of those. Today is a day to celebrate, as we’ve overcome one of our most challenging obstacles yet.

“With today’s decision, the Court ruled in no uncertain terms that the bonds of love, commitment, and responsibility that all our families share exist without regard to gender and deserve the dignity of being recognized under the law.”

Compare that to GOP Rep. Doug Lamborn of Colorado Springs:

“I am very disappointed that the Supreme Court chose to utilize their power to disenfranchise millions of Americans with valid moral and cultural concerns via this decision. By undertaking this staggering judicial overreach, the Court, in its very finite wisdom, has decided to throw out thousands of years of tradition and societal structure. Decisions of this magnitude should absolutely be made on a state-by-state basis with local and individual citizen involvement. This decision is a slap in the face to all Americans who value this tradition of local government.”

Meanwhile, Rep. Mike Coffman is ready to change the subject:

“The world is changing, and while I’ve supported traditional marriage, the court has ruled a ban on same-sex marriage unconstitutional. It is time we move forward and focus on the big debates of our day — how to keep our country safe and get Americans back to work.”

“Today’s historic Supreme Court ruling means same-sex couples will soon have the freedom to marry and equal respect for their marriages across America. This is a momentous win for freedom, equality, inclusion, and above all, love. We can celebrate that ours is a country that keeps its promise of the pursuit of happiness, liberty, and justice for all.

“As happy as we are to see this day arrive, we also know that our work is not done. We know that even as we achieve this milestone, our opponents will continue their fight against equality for LGBT people in the form of religious exemption laws. So, though we celebrate this joyous, incredible victory today, we will also not forget that we have to keep working until all lesbian, gay, bisexual, and transgender people can lead lives that are fulfilling, inclusive, and equal in every corner of our state.

“While the work toward equality for all Americans is far from over, the campaign for the freedom to marry has been transformative in helping Americans understand who LGBT people are. We hope state officials move swiftly to implement the Constitution’s command in the remaining 13 states with marriage discrimination. Same-sex couples and their families have waited long enough.”

A celebratory rally is set for 6:30PM this evening at the Colorado State Capitol.

The relevant cases were argued earlier this year. Attorney John Bursch, serving as Michigan’s Special Assistant Attorney General, defended four states’ bans on gay marriage before the Court, arguing that the case was not about how to define marriage, but rather about who gets to decide the question.

The case comes before the Supreme Court after several lower courts have overturned state bans on gay marriage. A federal appeals court had previously ruled in favor of the state bans, with Judge Jeffrey Sutton of the Sixth Circuit U.S. Court of Appeals writing a majority opinion in line with the rationale that the issue should be decided through the political process, not the courts…

“Gay and lesbian people are equal,” Solicitor General Donald B. Verrilli Jr. told the justices at the oral arguments earlier this year. “It is simply untenable — untenable — to suggest that they can be denied the right of equal participation in an institution of marriage, or that they can be required to wait until the majority decides that it is ready to treat gay and lesbian people as equals.”

No union is more profound than marriage, for it embodies the highest ideals of love, fidelity, devotion, sacrifice, and family. In forming a marital union, two people become something greater than once they were. As some of the petitioners in these cases demonstrate, marriage embodies a love that may endure even past death. It would misunderstand these men and women to say they disrespect the idea of marriage. Their plea is that they do respect it, respect it so deeply that they seek to find its fulfillment for themselves. Their hope is not to be condemned to live in loneliness, excluded from one of civilization’s oldest institutions. They ask for equal dignity in the eyes of the law. The Constitution grants them that right. The judgment of the Court of Appeals for the Sixth Circuit is reversed.

It is so ordered.

We’ll update with local coverage and statements as they come in.

And tonight, we expect a party from sea to shining sea.