SUNDAY UPDATE #2: Embattled Jeffco school board member Julie Williams does have someone in her corner–Rep. Gordon “Dr. Chaps” Klingenschmitt:

SUNDAY UPDATE: It’s possible that not even the army of Republican media flacks now working for the Jefferson County Board of Education’s conservative majority can save board member Julie Williams now, as her preposterous excuses for posting a link to an anti-LGBT hate group help drive the expanding story–9NEWS’ Jonathan Gonzales reports:

After 9NEWS received numerous complaints from some students, parents and teachers, board member Julie Williams said she was simply trying to inform parents who had been asking her for more information about the protest, which is known as the “Day of Silence.”

“I posted it as information because I believe parents have the right to know what’s happening in our schools, and then it’s up to a parent whether they want to opt in or out,” [Pols emphasis] Williams told 9NEWS. “Should’ve read it before I posted it. I mean I did make a serious mistake there with that.”

The “Day of Silence” is a silent protest conducted by students across the country each year, designed to raise awareness of bullying, especially involving lesbian, gay, bisexual and transgender students.

“Seven out of 10 gay and lesbian students experience harassment just because of who they are,” said Dave Montez, with One Colorado. [Pols emphasis]

Jeffco board member Julie Williams says when several parents asked her about the Day of Silence last week, she didn’t know what to tell them…

The problem here is obvious to anyone who knows anything about Julie Williams, a close family member of the “Neville Nutters” clan of far-right Republican political figures. The reason Williams posted a fringe anti-LGBT hate group’s information about a walkout to counter the Day of Silence protests against bullying is simple: that’s where she gets her information from as a member of the far-right fringe. Although some of the worst examples have reportedly been purged along with this latest post, Williams’ Facebook page has lots of examples of the kind of fringy “wisdom” that we have every reason to assume informs her votes on the school board.

As for not having read the link she posted, that would have to be so literally true–the very first sentence contains the words “perverse indoctrination”–that it’s difficult to believe. It’s a much more likely scenario to us that one of the aforementioned press flacks had to explain to Ms. Williams how “perverse indoctrination” is not an acceptable way for a board member to refer to a district-sanctioned event against bullying LGBT students.

And we’d say that speaks for itself. Original post follows.

Jefferson County school board member Julie Williams said late Friday that she was “sincerely sorry” and that she would remove a link on her personal Facebook page that she shared that encouraged families to keep their students home Friday and “away from perverse indoctrination” of the“homosexual-bisexual-transsexual agenda.”

“To be honest with you, I didn’t read the article,” Williams said. “I just saw it and thought I was sharing information with parents.” [Pols emphasis]

…SaveCalifornia.com describes itself as a “frontline pro-family leader standing strong for moral virtues for the common good.” But the Southern Poverty Law Center considers the organization a hate group, akin to the white supremacy political party American Freedom Party and Westboro Baptist Church. 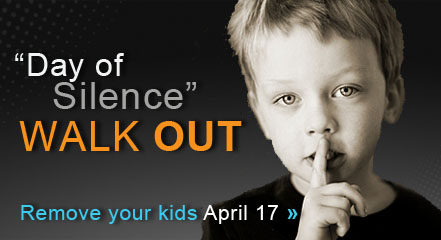 A Facebook post from Jefferson County School Board member Julie Williams, who gained infamy last year as the main proponent of a politically biased “review” of AP U.S. History that led to massive protests by students, is promoting…well, a walk out by students–but not for the same reasons that Jeffco students had last fall. From the link she shared:

If you have children in K-12 government schools, in California or another state, please keep them home and away from perverse indoctrination on Friday, April 17.

That’s the day of the so-called “Day of Silence,” where sexually confused students and teachers refuse to speak during the entire academic day. They’ll indoctrinate everybody else through handouts and chalkboard writings and videos and other propaganda tools. They’ll teach children to support and embrace the unnatural and unhealthy homosexual-bisexual-transsexual agenda and will label anyone who’s against it a “bigot,” a “hater,” or worse…

[N]o matter what, please keep your children home on April 17, to express your strong disapproval of the pro-perversity state school bureaucracy. Your children’s hearts and minds matter!

Today marks the annual Day of Silence, a protest originally organized by the Gay, Lesbian & Straight Education Network and carried out autonomously by students and faculty nationwide to raise awareness about bullying and violence against LGBT students. The event is opposed by the organization that sent out the above action alert, the Campaign for Children and Families, which has been heavily involved in the battle against marriage equality in California and elsewhere.

Now, given the umbrage Williams took with students who walked out in protest against reviewing the district’s history curriculum to ensure it “promotes patriotism,” isn’t it hypocritical to encourage students to stay out of school to protest the LGBT Day of Silence? That’s the question we ask before the real question, which is how Williams can conscionably promote this hateful vitriol against “perverse” students she is charged with representing as a member of the school board.

Unfortunately, we already know the answer to the second question. She got elected.