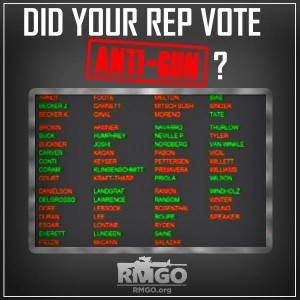 A press release from Colorado House Democrats describes a wild turn of events on the floor of the House today, in which Republicans attempted unsuccessfully to override Democratic Speaker of the House Dickey Lee Hullinghorst, and resurrect the magazine limit bill that died Monday in the House State Affairs Committee. The effort not only failed, but resulted in hard-right Rocky Mountain Gun Owners attacking fellow Republican legislators who didn’t go along with the plan in yet another act of red-on-red treachery:

House Republicans embarrassed themselves this morning with a failed coup attempt against Speaker Dickey Lee Hullinghorst that was covered with the fingerprints of Rocky Mountain Gun Owners, an extremist special interest group that has clearly taken control of House GOP floor strategy…

Actions of committees are deemed final, and the speaker routinely approves the reports of the various committees and enters them in the House journal to codify the work of those committees. Rep. Everett moved to amend the journal to overturn the work of the committee and show that SB15-175 passed. The rules of the House do not address an amendment to the House journal, leaving the decision up to the speaker, per the rules of the House. Speaker Hullinghorst, D-Boulder, ruled the motion out of order and came to the well to explain her decision.

A rare procedural move in the Colorado House on Wednesday aimed at forcing a vote to overturn the state’s ban on high-capacity ammunition magazines caught Republican Rep. J. Paul Brown in the crossfire…

Brown, from Ignacio, was one of only five Republicans to join in supporting the speaker.

Everett, however, said Brown should have supported challenging the speaker, questioning Brown’s commitment to repealing the gun control laws that were passed by Democrats in 2013. [Pols emphasis]

After this morning’s dustup, Rocky Mountain Gun Owners attacked all of the Republican representatives who voted against the “coup attempt.” Unfortunately for Republicans hoping to remain competitive in the 2016 elections, this includes critical targeted Rep. J. Paul Brown in HD-59–whose seat is central to both parties’ strategy for next year. Other Republicans now on the RMGO’s shit list include Reps. Tim Dore, Yeulin Willett, Bob Rankin, and Jon Keyser.

Here in reality, we know that Rep. Brown is pretty far from what you’d call anti-gun. Brown narrowly ousted Democratic Rep. Mike McLachlan last year after campaigning heavily against McLachlan’s support for the magazine limit bill (despite the fact that McLachlan had actually amended the magazine limit to increase it). But RMGO’s members are likely to follow the group’s lead without question, even when they make little sense as in this case–especially where it concerns downballot races voters know little about otherwise.

Bottom line: this was an embarrassing fool’s errand for the House GOP minority. It’s especially shocking that Minority Leader Brian DelGrosso participated in this action, the most brazen misuse of procedure anyone has seen since majority Republicans resorted to similarly drastic measures to kill the civil unions bill in 2012–and probably longer. Today’s incident is arguably even worse than what Republicans did in 2012, since the magazine limit bill had been killed fair and square in committee after hours of testimony. Safe to say that this will not improve bipartisan relations in the Colorado General Assembly.

As for relations between Republicans, eating their own to placate Dudley Brown seems to be the rule this year.