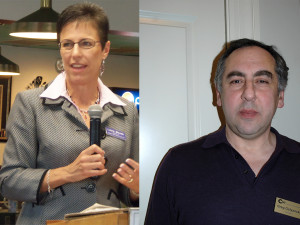 A bill up for debate in the Senate Judiciary Committee today, Senate Bill 15-181, focuses on the rules for court-appointed receivers who take charge of assets during a bankruptcy proceeding or other lawsuit. Sponsored by hard-right Sen. Laura Waters Woods (R-RMGO), this legislation isn’t as interesting for what it does as who is supporting it.

The chief public proponent of SB15-181 is a figure our longtime readers will know well–although some may express surprise that he is still involved in Colorado politics at all. Gregory Golyansky, president of the conservative Colorado Union of Taxpayers, wrote an opinion piece for the Complete Colorado blog making the case for Sen. Woods’ bill:

My business of 16 years has been destroyed. I am unable to get the key to enter my own building. The court-appointed receiver is confiscating all the income from my real estate and using it, I know not how. In three years, he has not given an accounting of moneys collected, dispersed, or spent. The judge refuses to set any date for the dismissal of the receiver, and I am not even allowed to appeal any of these miscarriages of justice.

All of this has happened under Colorado’s existing receivership law, which as currently written allows both judges and receivers almost unlimited power over a person’s property.

The hopeful news is that Colorado State Sen. Laura Woods, along with nine other legislators, has introduced Senate Bill 181, which would reform the state’s existing receivership law and give the people more rights when under a receivership…

What Golyansky fails to mention here, among many other details, is the nature of at least one business he ran. An investigative report in the Denver Post revealed that Golyansky’s pawn shop business ABC Loan was a major source of illegal guns acquired by “straw purchasers” to be resold on the street and often used in crimes. David Olinger of the Post reported that an incredible 40% of multiple gun purchases traceable to criminal arrests in the state of Colorado were made at Golyansky’s pawn shop during the period it was in business. Guns sold by Golyansky were found at crime scenes from Colorado to Los Angeles. In 2005, one recipient of those guns was convicted in a triple murder in Aurora.

Despite his well-publicized connections to illegal guns and violent crime, Golyansky has somehow remained a credible player in Colorado conservative politics as the head of the CUT. And he’s been no less of a liability: in 2011, Golyansky was widely condemned, even by embarrassed Republican allies, after referring to government employees as “scum” and the “stormtroopers of communism.”

We have no idea how Golyansky manages to keep himself ingratiated with far-right conservative politicos like Ken Buck, Shawn Mitchell, and now Sen. Woods. But suffice to say, Golyansky is not someone any politician with a sense of self-preservation should be sharing a spotlight with.