Republican Rep. Gordon “Dr. Chaps” Klingenschmitt has been getting hammered over the last several days because of comments he made in the aftermath of the Michelle Wilkins attack in Longmont. Now, he’s speaking out about speaking out, and it’s not going well.

Today, Dr. Chaps posted a special edition of his “PIJN News” that offered a sort-of apology for his statements last week about the shocking attack of a pregnant woman in Longmont. In a video lasting nearly 29 minutes, Dr Chaps goes “Full Klingenschmitt” on a variety of subjects — including his clarification of what the word “this” really means — before saying that he was wrong about everything he did (but not really) and apologizing to “anyone who was offended.” 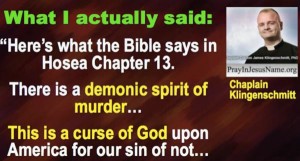 As 9News reports, Dr. Chaps’ cries of “dishonest reporting” aren’t earning many sympathetic ears…though he is doing a heck of a job in continuing to promote his own idiotic remarks:

9NEWS reporting on the subject included Klingenschmitt’s exact quote, with the source video being played multiple times on television.

Klingenschmitt’s words in the original video are:

“This is the curse of God upon America for our sin of not protecting innocent children in the womb. Part of that curse for our rebellion against God as a nation is that our pregnant women are ripped open.” [Pols emphasis]

In an interview with 9NEWS on Thursday, Klingenschmitt declined multiple opportunities to offer an alternate interpretation of his remarks.

Many Colorado Republicans were upset last week when Dr. Chaps used his weekly PIJN News show to discuss the attack on the pregnant Michelle Wilkins and attempting to link the crime to a call for policies restricting abortion access. Dr. Chaps even earned a rare rebuke of his own GOP Caucus on Friday.

Nothing that Dr. Chaps says in his video really comes across as a heartfelt apology — particularly when the first 20 minutes are spent on ripping his critics. Dr. Chaps also spends a lot of time talking about being misquoted, before later putting on-screen the words that he said (which are almost exactly how he was quoted). In the end, the only real benefit here is to promote himself and to keep advancing a story (the story about Dr. Chaps, not about the crime)  that is not helpful to him or Republicans in general.

You can watch the entire video after the jump, and here’s a quick rundown of what you’ll find:

♦ 4:14: Dr. Chaps says he will apologize later in the video
♦ 5:30: Says Mike Littwin of the Colorado Independent is a “dishonest reporter.”
♦ 7:00: Calls Brandon Rittiman of 9News a “dishonest reporter” and demands a retraction.
♦ 9:00: Fox 31’s Eli Stokols is added to Dr. Chaps’ list of “dishonest reporters” of whom he demands a retraction.
♦ 11:27: Attacks El Paso County Republican activist Laura Carno and calls her a “pro-homosexual activist.”
♦ 13:31: Dr. Chaps praises former Missouri Congressman Todd “Legitimate Rape” Akin.
♦ 13:47: Claims to have beaten Westboro Baptist Church in a debate, or something.
♦ 14:42: Talks about Colorado Springs Gazette reporter Megan Schrader and praises her for being an “honest reporter” because she issued some sort of retraction.
♦ 16:26: Praises Denver Post reporter Lynn Bartels for being an “honest reporter” because she quoted him directly?
♦ 19:26: Tries explaining what he actually said, with specific pieces of quotes aired on-screen. Watch this part of the video and see if you can make sense of what he just said about the word “this.”
♦ 23:20: The apology at last? Dr. Chaps says, “I do want to apologize for my words last week,” after saying that he would not apologize for things he didn’t say. Uh, okay.