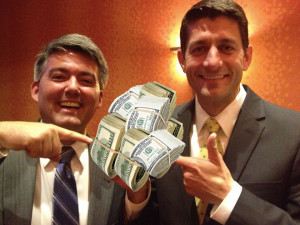 Sen. Cory Gardner, left, and House Budget “genius” Rep. Paul Ryan. They want your money…but they aren’t sure what to do with it.

Senate Republicans announced their federal budget plan this afternoon, and it…well, it’s not so good. As the New York Times reports:

Over all, the Senate version hews closely to the budgetary intent of the House proposal, relying on a repeal of the Affordable Care Act, turning Medicaid and food stamps into block grants, and cutting domestic programs to end federal red ink without tax increases.

The Senate budget also relies on a significant gimmick by counting on a repeal of the health law but also assuming that $2 trillion from the law’s tax increases will continue to flow into the Treasury. [Pols emphasis]

The budget does little to placate concerns of Republican defense hawks that spending caps imposed by the 2011 Budget Control Act are significantly undermining Defense Department operations. Rather than adding money over the caps, the Senate plan creates what is known as a “deficit neutral reserve fund,” which would allow negotiators later this year to reach an accord that overrides the 2011 budget law.

Did you catch that paragraph about the “significant gimmick?” Senate Republicans want to repeal Obamacare and pocket the $2 trillion in savings.

So, Republican Senators don’t have a plan to replace Obamacare with anything, but they’re going to keep the money from gutting health care so they can spend it on…other stuff? What?

Jonathan Weisman of the New York Times breaks down the Senate plan in pretty straightforward language:

The first Senate Republican budget since 2006 is long on ambition but short on details. It foresees saving $4.3 trillion from mandatory programs like Medicare, food stamps and Medicaid, but unlike the House budget, it does not make specific policy prescriptions, such as converting Medicare into a voucherlike program that allows older people to buy subsidized insurance on the private health care market.

The budget offers up $430 billion in savings from Medicare without saying how. [Pols emphasis] It does require a change to Medicaid to cede much of its administration and control to state governments, saving $400 billion over 10 years. But by maintaining coverage requirements for the low-income elderly and for people with disabilities, the Senate’s Medicaid savings are less than half of the House’s proposed $913 billion cut.

Budget committees from the Senate and House should begin discussing their curious budget proposals next week in hopes of finding some sort of fiscal agreement that doesn’t just completely ignore reality…or totally screw over the Middle Class.