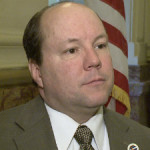 As part of the State Party reorganization, Republicans intend to change their bylaws so that Party Chair is no longer a full-time salaried position (which was how the GOP used to operate before making the Dick Wadhams exception last decade). This means that the top full-time job with the Republican Party will revert back to the role of Executive Director…which is apparently going to be filled by former State Sen. Ted Harvey.

Harvey has been telling folks at today’s Republican reorganization meeting that he will assume the role of Executive Director as soon as Monday. Harvey is an interesting choice, to say the least; he is a somewhat polarizing figure among Republicans who has been recently working to raise money for the controversial “Scam PAC” Stop Hillary PAC. We’ll have more to say about that in the coming days.

We’ll update as we learn more, but as always, you heard it here first.