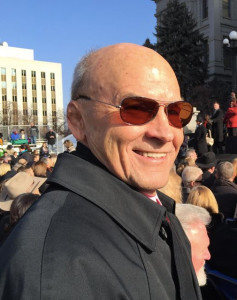 As the Grand Junction Sentinel’s Charles Ashby reports today, freshman GOP Rep. Dan Thurlow is emerging as something of a wild card within the Colorado GOP House minority. We took note of a vote by Thurlow earlier this session against a Rocky Mountain Gun Owners bill to ease the acquisition of machine guns, rockets, and other military-grade weapons. But that’s not the only issue on which Thurlow is throwing off his fellow Republicans:

Rep. Dan Thurlow earned a lot of respect from Democrats on Tuesday when he was the only Republican in the Colorado House to vote for a bill to ban conversion therapy for gays and lesbians…

“To me, the conservative position is to stay out of other people’s lives, and everybody should have the ability to live the life they want,” Thurlow said after casting his vote. “I’m not trying to change anybody.”

Immediately after the vote, the sponsor of the bill, Rep. Paul Rosenthal, D-Denver and one of seven openly gay lawmakers in the Legislature, shook Thurlow’s hand and thanked him for his vote.

The bill passed the House 35-29, but faces an uncertain future in the GOP-controlled Senate, where it now heads.

As Ashby reports, Thurlow also voted against two so-called “religious freedom” bills this week, joining majority House Democrats to kill what opponents called legislation granting a “right to discriminate.” Thurlow also helped vote down an attempt by Republicans to roll back vehicle registration late fees passed in 2009 that have funded dozens of bridge replacement projects around the state.

House Minority Leader Brian DelGrosso, for his part, is paying lip service to the idea that all of his caucus members are independent actors representing their constituents:

“I’m the minority leader that allows my members to vote how they feel like they need to best represent their district,” DelGrosso said. “I’ve never instructed any of those folks that they need to bear the Republican torch on every issue. I’ve said from day one, we’re going to have caucus issues, but the reality is, if you feel like you need to vote a different way for your district, that’s why you were sent here.”

This is, of course, exactly what you’d expect DelGrosso to say in public. Behind the scenes, however, we’ve heard that Thurlow’s votes are greatly irritating many other House Republicans, and stirring up opposition in Thurlow’s safely Republican Mesa County district. Thurlow is no Jared Wright, whose personal financial indiscretions before taking office and embarrassing mistakes as a freshman legislator made him a one-term wonder–but if Thurlow keeps voting his conscience instead of the GOP party line, it’s not unreasonable to speculate that he might share Wright’s fate.

And that would be a real shame. Colorado Republicans need more Dan Thurlows.