Thursday's bill was the second of three anti-abortion bills introduced this year. A bill to increase the regulation of abortion clinics was defeated in committee earlier this year. The third bill, banning partial birth abortions, is scheduled for committee debate next Tuesday.

HB15-1041 would make abortion unlawful with violations resulting in a class 3 felony. An exemption is made for the life of a woman, though exemptions for rape and incest are not included.

When pressed by committee chair Rep. Daniel Kagan (D-Cherry Hills Village) about cases of rape and incest, supporters of the bill defended the non-exception saying that abortion often hides incest or causes the women affected to feel victimized twice. 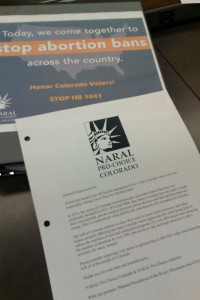 The Colorado House Judiciary Committee is set to debate (and barring unforeseen circumstances, to kill) House Bill 15-1041 Thursday afternoon, the bill sponsored by a number of House and Senate Republicans to make abortion in Colorado a class 3 felony. It's the same essential language that Republicans introduce in most legislative sessions, including and preceding now-U.S. Sen. Cory Gardner's bill to impose the same penalty on doctors who perform abortions in 2007.

A press release from NARAL Pro-Choice Colorado recounts the effort that organization is making, as in previous years, to ensure that the bill not only dies, but politically damages Republicans who sponsored and enabled it:

For the second time in two weeks, anti-choice legislators are wasting time in the General Assembly with HB 1041, yet another “personhood” bill that would ban all abortion and many forms of birth control. This comes after Colorado voters defeated a personhood measure by landslide margins in 2014 for the third time. The bill will be heard in the House Judiciary Committee Thursday afternoon…

In 2014, the voters of Colorado overwhelmingly reiterated a belief that they had previously declared in 2012, 2010 and 2008: they believe women have the right to make their own personal, private medical decisions about abortion and that abortion bans are wrong. This is a mainstream value held by the vast majority of Coloradans for decades.

The will of Colorado citizens is clear: they want to focus on the economy and other  issues currently affecting our state. Colorado voters appreciate the work being done to reduce the numbers of teen and unintended pregnancy by over 40% and in turn reducing the number of abortions by over 30%, but access to safe and legal abortion is still a necessity for many women.

As everyone knows, this legislation has absolutely no chance of passing the Democratic-controlled House Judiciary Committee today, nor would it pass the House if it made it to the floor–and maybe not even the GOP-controlled Senate, where we have to think there is a moderate Republican vote left to stop a felony abortion ban bill. And of course, Gov. John Hickenlooper would veto it in the worst case. These simple realities have made even some Democrats complacent about opposing–and as a result, publicizing–continuing Republican efforts to ban abortion in Colorado.

Morally and politically, that's a huge mistake. In last year's elections, the principal response to Democratic attacks over reproductive choice from Republicans was that the "war on women" was overblown. Cory Gardner morphed from the sponsor in the Colorado legislature of the same felony abortion ban up for debate today to a supposed "champion" of access to birth control who had only voted for hypothetical abortion bans. Gubernatorial candidate Bob Beauprez, who in 2006 had promised to sign a total no-exceptions abortion ban as governor, tried to claim last year that he would not do anything of the kind. Republican surrogates and the Denver Post's editorial board told voters flat-out not to worry about abortion rights.

Well folks, what if Bob Beauprez had won? What if Republicans had picked up just a couple more House seats, and 2014 abortion ban co-sponsor Brian DelGrosso was now Speaker of the Colorado House? We're not talking about big margins in either case. If Democrats aren't out there every day extracting maximum damage from the GOP for these bills, reminding voters every time how close last year's elections were, and pushing back on the GOP's insistence that the "war on women" is mythical with this irrefutable proof that it is not mythical at all…if they're not doing that, they're not doing their jobs. And they'd be missing a priceless opportunity.

Because in addition to being politically expedient, making these bills costly for Republicans at the ballot box is the only way to make them stop.