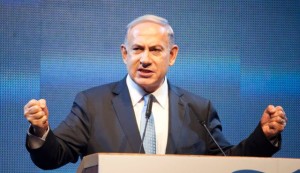 Controversy is building in Washington over an address to Congress by Israeli Prime Minister Benjamin Netanyahu scheduled for March 3rd–just weeks before Israeli elections, and not invited by President Barack Obama as a breach of diplomatic protocol. Netanyahu's address, pertaining to negotiations with Iran over that country's nuclear program, is controversial in Israel for the same reason, with a majority of Israeli voters saying the speech should be cancelled. Reuters:

The speech has caused controversy in Israel and the United States, where the Democrats and the White House are angry that the Republican speaker, John Boehner, invited Netanyahu to speak at a sensitive time in the nuclear negotiations between Iran and six big powers including Washington, and only two weeks before Israel's closely fought March 17 election.

President Barack Obama, at odds with Netanyahu over the Israeli prime minister's criticism of the nuclear talks, will not meet him during his visit, saying it is a breach of protocol to receive a foreign leader before an election.

As of now, most members of Colorado's delegation reportedly plan to attend Netanyahu's speech, including all the Republicans, Democratic Sen. Michael Bennet, and Rep. Jared Polis. Rep. Ed Perlmutter hasn't made a public announcement yet. The one Colorado representative who has said she will not attend Netanyahu's speech is…well, we just gave it away, it's Rep. Diana DeGette. Rep. DeGette has a scheduling conflict on March 3rd:

Congresswoman DeGette will not be able to attend Prime Minister Netanyahu’s speech. She has had a long-standing scheduling commitment that morning to address a clinical research group about her 21st Century Cures initiative, and we just learned this morning that the Prime Minister’s speech is scheduled for 11:00, which creates a conflict for her.

Other than a highly one-sided report in the Boulder Jewish News, DeGette's decision to not attend Netanyahu's address hasn't received much press. We expect that will change as long as the speech isn't cancelled, that others will be given many chances to comment, and that Rep. Perlmutter's decision whether or not to attend will be closely watched. It's a longstanding presumption in American politics that categorical public support for Israel is mandatory for any real political viability. The problem with this address to a Republican-dominated Congress is that Netanyahu is making a partisan issue out of something that historically hasn't been. And it's forcing a conflict of loyalties that American supporters of Israel haven't been made to reckon with.

In Israel, Netanyahu has been roundly criticized even by some of his right-wing allies, mostly for appearing to put his ties to the Republican Party ahead of the close relationship Israel has always had with the United States. [Pols emphasis]

It should be noted that attending a speech is not the same thing as agreeing with it. But insofar as Netanyahu is involving Colorado politicians in Israeli domestic politics without their consent, we're obliged to point out that not every friend of Israel is a Likudnik.

Or, for that matter, a Republican.