A bill that aimed to put more regulations on abortion clinics in Colorado failed in a House committee Thursday, after supporters of regulations said it would make the process safer and opponents called it an attempt to make abortions harder and more expensive to get. The bill was killed on a 8-5 vote.

Awesome, "Dr. Chaps!" You've discovered the only way to make this bill even more pointless. 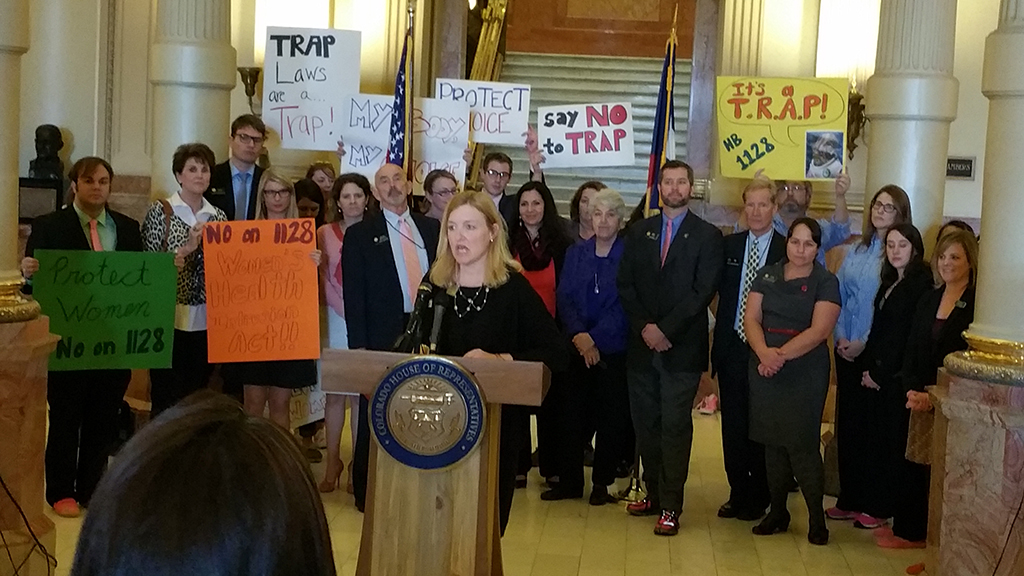 A press release from NARAL Pro Choice Colorado today publicizes a bill from Colorado Republicans to pass a host of Texas-style restrictions on abortion in Colorado, House Bill 15-1128:

Among our core values is a belief that government has no right to interfere with our personal, private medical decisions. So when anti-choice male Colorado legislators introduce HB 1128, a ‘women’s health’ bill that would impose unnecessary restrictions on Colorado abortion care providers and reproductive health care access, we stand up and say, No, not in our state. Furthermore, the bill establishes "personhood”, which Coloradans voters have rejected three times at the ballot box.

Colorado doctors and health care providers shouldn’t be harassed out of business by anti-choice politicians, and Colorado women shouldn't be denied access to care for political, not medical, reasons. Abortion is one of the safest procedures performed in the United States.  According to the Centers for Disease Control less than half a percent of all abortions lead to complications that might lead to hospital care.Abortion providers are already regulated by their professional licensing boards and follow standards set by the American College of Obstetricians and Gynecologists and Centers for Disease Control.

In other states, anti- choice Targeted Regulation of Abortion Providers (TRAP) laws have reduced access to reproductive health care, including abortion care. In Texas TRAP legislation resulted in the closure of 32 out of 40 clinics that provided reproductive health and abortion services. Women in those states are now driving hundreds of miles across the state, in some cases across state lines, to get the care they need. Further, these laws impact the most marginalized, low income women and women of color who already experience the greatest barriers to accessing the care they need.

Although this legislation is being pushed by Republicans as "not banning abortion," in fact the entire bill pertains to the regulation of abortion clinics–and imposes regulations like requiring a doctor at an abortion clinic have admitting privileges at a local hospital. In practice, these regulations have resulted in the closure of most abortion clinics in states like Texas where they've been enacted.

Also interesting in this legislation, as the release above alludes to, is a provision that once again seeks to "define" an unborn child. That is, from the moment of conception.

"UNBORN CHILD" MEANS THE OFFSPRING OF HUMAN BEINGS FROM CONCEPTION UNTIL BIRTH.

"CONCEPTION" MEANS THE FUSION OF THE HUMAN SPERMATOZOON WITH A HUMAN OVUM.

Really, folks, it wouldn't be a Colorado Republican abortion bill without a little Personhood! This is where their bill that "doesn't ban abortion" gets tricky–and might, if passed, do exactly what they say it wouldn't. The bill is expected to die today, but not before giving Democrats another opportunity to prove again why that whole "war on women" thing is not, you know, fake. But for a couple of House races and Bob Beauprez, this could have been a very different situation.

And that is a lesson for both sides.