In Which Sen. Tim Neville Prefers The Company of Men 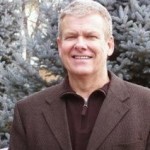 Republican Sen. Tim Neville is generally regarded as one of the most stridently conservative members of the Colorado Senate, and so far this year he's had ample opportunity to prove it. As a member of the Senate Business, Labor, and Finance Committee late last month, Neville helped kill the Colorado Pay Equity Commission, which has now turned into a rallying point for Democrats as they work from the House to get the commission's work reauthorized. More recently, Sen. Neville's sponsorship of legislation reaffirming "parent's rights" to not vaccinate their children in Colorado has made him the local face of the brewing national controversy over vaccination opt-outs. That bill is set to be heard today in the Senate Education Committee.

Yesterday, at the end of debate on another bill, Sen. Neville thanked the members of the GOP-controlled Senate State Affairs Committee for their time, in a manner that was, well, curious. And maybe highly revealing.

NEVILLE: Thank you sir, and as the only other committee that is all male, [Pols emphasis] other than Finance I believe probably in the legislature, it was my pleasure to be here.

Sources tell us that at the moment the words "all male" passed Sen. Neville's lips, another member of the committee Sen. Owen Hill quickly gave the "cut" signal across his throat–that is, "cut the audio!" There's no additional context to provide here. Immediately after this statement, committee chairman Sen. Ray Scott gaveled the hearing to a close, and that was that.

Excusing the title of our post which was strictly for laughs, we're pretty sure we can rule out Sen. Neville preferring all-male committees due to being, you know, gay. We suppose you never really know, and at a certain level, it wouldn't be our business anyway. But with that excluded, it seems like this really was a "joke" about how much easier it is for Neville to work with fellow male legislators. As opposed to those annoying women, with their endless griping about pay equity commissions and tearing up about sexual abuse and so forth.

Which brings us to the possibility, one we cannot rule out, that Sen. Neville wasn't joking at all.