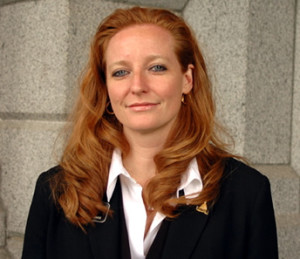 It never lasts, of course. A press release from Colorado Senate Democrats yesterday afternoon is a shot across the bow of the new one-seat Republican Senate majority, calling them out on their "radical repeal-a-thon agenda" in not-screwing-around terms. Game on:

While Senate Democrats have been hopeful of working together to move Colorado forward, there has been a pattern of bills introduced by Republicans legislators which aggressively move the state backward.

Despite Pres. Bill Cadman saying, “We all want to be a part of building a better future for Colorado,” only nine days into the 70th Legislative Session, the Senate Republicans have introduced extreme bills that put ordinary Coloradans at risk.

In the Senate alone, examples of the “Radical Republican Roll-Back” include bills that would allow:

• pedophiles or other criminals to run small daycares,
• the repeal of the renewable energy standard,
• felons to get guns by repealing criminal background checks,
• developers to build without regard to homeowners’ rights,
• discrimination against workers,
• more unvaccinated children in our schools,
• sale of Colorado’s public lands and open space,
• unconstitutional vouchers to drain public funds for K-12, and
• special interests to spend more on elections with less transparency.

More after the jump. It's better this way, folks. Admit it.

The worst offenders introduced in the first nine days include:

“The ‘Felons in Child Care’ Act,” SB 15-070 (Sen. Kevin Lundberg)
This bill expands deregulation to any day care provider with fewer than 10 kids.  The eliminated regulations include background checks, and inspections of facilities for safety and welfare of the children.

“The ‘Right to Discriminate’ Act,” SB 15-069 (Sen. Laura Woods)
This bill repeals basic civil rights protections for workers in companies with fewer than 15 employees.  It allows small businesses to discriminate on the basis of sex, race, religion, national origin, sexual orientation, and disability.

“The ‘More Secret Money in Politics’ Act,” SB 15-061 (Sen. Chris Holbert)
This bill allows issue committees that spend less than $5,000 to keep their donors secret from the public.

“The ‘High, High Mountains at Low, Low Prices’ Act,” SB 15-039 (Sen. Kent Lambert)
This bill will put our state and federal lands at risk for being sold for private drilling and development.

“The ‘Mr. Gorbachev, Tear Down those Windmills’ Act,” SB 15-044 (Sen. Ray Scott)
This bill attacks the entire renewable energy standard.  It will increase prices for energy in the long run, increase pollution, and kill the clean tech jobs that go with it.

“The ‘Vouchers Defunding and Privatizing K-12’ Act,” SB 15-045 (Sen. Kevin Lundberg)
This bill takes money from the state budget and gives it to parents who have opted to send their kids to home or private schools.

“The ‘Chaos for Mail Ballots’ Act,” SB 15-060 (Sen. Chris Holbert)
This bill violates the National Voting Rights Act and attempts to force County Clerks to change addresses in the voter file, using information that may be out of date and incorrect.

“The ‘Arms Race’ Act,” SB 15-032 (Sen. Vicki Marble)
This bill allows anyone to carry a concealed weapon without a permit or background check.  It deprives all other Coloradans from knowing what kind of strangers around them and their loved ones are armed.

“The ‘Firearms for Felons’ Act,” SB 15-086 (Sen. Kent Lambert)
This bill is another 2013 rollback bill.  It allows for private and gun show firearm transfers without a criminal background check.

“The ‘Developers over Homeowners’ Act,” SB 15-091 (Sen. Ray Scott)
This bill cuts off rights and prevents people who have damage or defects to their property from seeking remedy for faulty work by radically reducing the statute of limitations.

THE WEEKLY WHOPPER:  The prize for this week’s Weekly Whopper goes to….

This bill has a smattering of extreme policies and mandates.  It restricts minors from confidentially accessing vital medical services including contraception, LGBT counseling, drug and alcohol abuse treatment, and suicide prevention.  It burdens schools with additional opt-out procedures for sex education, which is already permitted in law.  It could also increase the number of unvaccinated children in our schools.