Calling For Rep. Chaps’ Resignation (After Helping Elect Him) 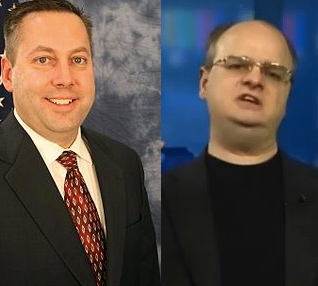 Klingenschmitt got blowback from both parties before he was ever elected after he compared US Rep. Jared Polis (D-Colorado) to ISIS.

He later explained that this was supposed to be hyperbole to make a point.

Now that he's sworn in to office, Klingenschmitt is still making his satellite TV show and upsetting groups people with what he says…

"I know our state legislature is part time, but I didn't realize Dr. Chaps would continue his comedy career while in office," Polis told 9NEWS. "I will continue to pray for him to return to reality from his delusional state. I'm not offended so much as I am concerned for him."

Klingenschmitt has continued posting his Pray In Jesus' Name Youtube shows after his swearing in as a Colorado legislator. Last week, Rep. Klingenschmitt celebrated the repeal in December of an anti-discrimination ordinance in Fayetteville, Arkansas that he claimed was intended to "put Christians in jail." Klingenschmitt's latest show, picked up by Right Wing Watch, features an interview with anti-Muslim activist Bill Warner, who declares that President Barack Obama is "the face of Islam in America."

So, like we said, Rep. Chaps isn't toning down the crazy to serve. We never expected him to, of course, but it's no longer a hypothetical.

Perhaps most interesting about Klingenschmitt's 9NEWS profile are statements by his predecessor, former House Minority Leader Mark Waller. Waller is now more or less calling for Klingenschmitt to resign:

Waller agreed that at some point soon the freshman legislator is going to have to choose to be Dr. Chaps or be Rep. Klingenschmitt, but he can't be both.

"I just don't think he can do that and be successful," said Waller, adding that if Klingenschmitt is not willing to part ways with Dr. Chaps, "then, perhaps maybe the best thing for the people of the state of Colorado and for the constituents of house district 15 would be for him to step aside and let somebody else take on that challenge."

The contrast between what Waller says today and what he said before the 2014 elections is fairly important to understand:

"If you're not voting for him, you're voting for the Democrat and quite honestly legislative majorities matter," Waller said. [Pols emphasis]

That's what Waller said last August. At least then, which was well after "Dr. Chaps'" special brand of crazy was broadly understood, Waller was still more interested in securing a Republican majority in the Colorado House than protecting that institution–and Waller's own constituents–from the embarrassment Rep. Klingenschmitt is currently visiting upon them. Of course, now that Klingenschmitt has beaten his Democratic opponent, the GOP faithful of HD-15 could pick a replacement for him if they succeed in pushing him out. Failing that, Klingenschmitt might be targeted in a GOP primary next year, much like Waller himself did against infamous appointed Rep. Doug Bruce in 2008.

The biggest problem? Rep. Klingenschmitt won his seat by almost 70% of the vote. No matter how disastrous he may be for the Republican brand, the results of last year's elections are a pretty strong argument that "Dr. Chaps" doesn't need to listen to Waller or anyone else.