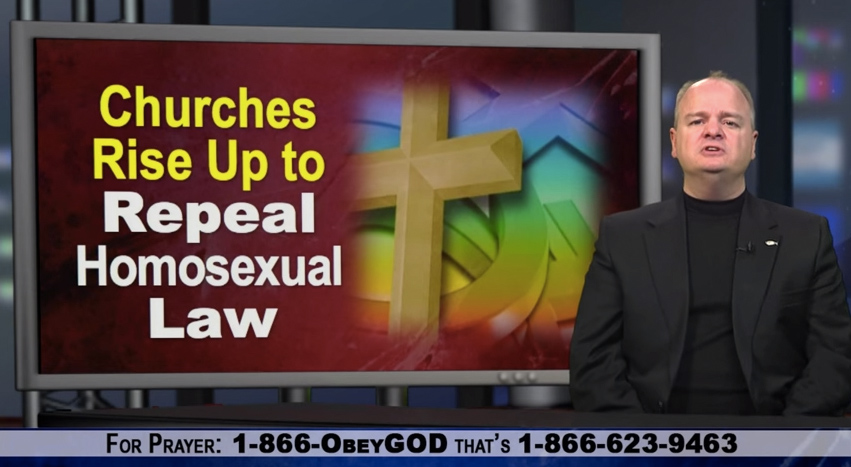 Rep. Gordon "Dr. Chaps" Klingenschmitt was sworn in as a Colorado state legislator last Wednesday, an event he celebrated with his Facebook followers at the Pray in Jesus' Name Project. Rep. Klingesnschmitt didn't waste time getting the next couple editions of his Youtube video call-in show posted despite his swearing in last week, and this week's show is already online. For those just joining us, Colorado Rep. Gordon Klingenschmitt is a disgraced former Navy chaplain who regularly accuses President Barack Obama and a long cast of players in American politics of being "possessed" with "demonic spirits." On his weekly video program, "Chaps" warns that Obamacare causes cancer, and says only people who are "going to heaven" deserve equal rights from government. Last year, Chaps was finally persuaded to apologize, an apparently very rare occurrence, after suggesting that Rep. Jared Polis wanted to "join ISIS in beheading Christians."

In the latest episode of Pray in Jesus' Name, Klingenschmitt discusses the repeal of a city ordinance in Fayetteville, Arkansas that extended discrimination protections to LGBT residents. The narrow vote to repeal of Ordinance 119 after it was passed by the Fayetteville City Council last August was a pretty big story in mid-December. But the law "Chaps" talks about on his show bears little resemblance to what was actually passed–he describes Ordinance 119 as a law to "put Christians in jail, or at least bankrupt their businesses." On a one-to-ten scale of "Chaps" crazy, we'd rate this a solid 7+.

Despite his nationally infamous work product, which was notorious long before he ran for the Colorado legislature, "Chaps" was elected to represent the citizens of El Paso County's House District 15 by nearly 70% of the vote. Here's a sidenote of trivia: HD-15 is the same ultra-safe Republican House seat briefly occupied by anti-tax crusader (and now convicted tax cheat) Douglas Bruce, who was appointed to HD-15 after it was vacated by now-Senate President Bill Cadman. Bruce's abrasive personality wasn't compatible with service as a lawmaker (to put it mildly), and he was swiftly ousted in a primary by Mark Waller in 2008. Waller left the seat one term early to unsuccessfully run for Attorney General, opening the way for Klingenschmitt.

Rep. Klingenschmitt has yet to reveal himself in committee hearings and floor speeches as the same guy who makes–no small feat–some of looniest statements available on Youtube, but that's only because he hasn't had the chance yet. At every such opportunity as the legislative session gets going, we expect Democrats to be on hand with recording devices. Our personal prediction is that this is a man pathologically unable to contain himself, and he is going to take the offensive lunacy within the Republican caucus to embarrassing new lows.

The next report will be from the House Health, Insurance and Environment Committee. Stay tuned!