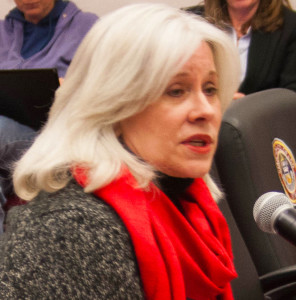 The Pueblo Chieftain reports today on a swift abort to talk of a paid recount of two (not really) close races there:

The local GOP had by the end of the day on Monday to deposit $17,000 into an escrow account to pay for the recount, a figure quoted to the GOP by County Clerk and Recorder Gilbert “Bo” Ortiz and disputed by the party.

Becky Mizel, chairwoman of the local GOP, said her members came close to raising the money and lamented that part of Ortiz’s quote included an outside consultant to be on hand to answer any questions about the tabulating machinery when the GOP asked for that during the actual election.

“Ethically, I can’t justify spending the hard-earned money of my membership on this,” Mizel said. [Pols emphasis]

This comes after a lengthy period of nit-picking by Pueblo Republicans and eccentric former Aspen mayoral candidate Marilyn Marks, who insisted without evidence–even as they appear to have not hurt Republicans a bit–that mail ballots were wreaking havoc with Colorado elections.

Gary Mikes, chairman of the Adams County Republican Party, said Monday he suspects that invalid ballots were turned in by voters during the Nov. 4 election in the race for House District 31, in which Democrat Joseph Salazar ended up with a 221-vote lead over Republican challenger Carol Beckler. The same goes for the Adams County commissioner race, in which Steve O'Dorisio, a Democrat, bested GOP candidate Joseph Domenico by 597 votes, Mikes said.

In an email to Adams County elections officials earlier today, Adams County GOP chairman Gary Mikes withdrew that request with an apology "for any inconvenience." As for Pueblo, the margins in the two races in question, one House race and the county clerk race, were significantly larger than the extremely narrow races in Adams County–which themselves still fell outside the allowable range for a recount paid for with state funds.

What we've heard, as with Pueblo, is that the "concerns" in Adams County boiled down to baseless James O'Keefe speculation about vote fraud, none of which has been substantiated anywhere, and as we've discussed at length would have been impossible to pull off due to the safeguards clearly outlined in last year's election modernization law. Overall Republicans did very well in this year's elections, to include surprisingly strong performance in traditionally Democratic Adams County. If anything, we can imagine why Republicans wouldn't want to start looking under rocks up there, lest they endanger some of their own close wins.

Bottom line: the real problem may be that reality in our elections this year completely failed to live up to conspiracy theorists' hype, and they've just been a little slow to catch on to this fact. But when it comes time to put your money where there mouth is, reality has a way of snapping back into focus.