UPDATE #3: We've just received word that the flyer from the Evergreen Tea Party shown below may have mistakenly listed the American Freedom Party as a sponsor of last Monday's meeting. There appears to be some confusion on this point, but it's possible that whoever made this flyer mistook the American Freedom Party for another conservative organization that goes by the acronym AFP: Americans for Prosperity.

This would be a fairly comedic error if true, and certainly not the fault of the parents alarmed by this flyer who sent it to us–but would also be, we think, objectively good news. We'll update once we can confirm this latest information.

UPDATE #2: From a statement forwarded to us by Evergreen High School principal Ryan Alsup:

My goal for the evening was to brag about our school, and let the people know about the great education we currently provide. My address consisted of our data, the data that has made us one of the top ranked schools in the state and country. I am very proud of our students, and staff, and the relationship that we have developed with our immediate community. As a principal, I cannot discuss my own political affiliations, however, please know that I do not condone or support any anti-Semitic or racist views and organizations. It is my job to ensure that we provide a balanced education for all students. We work hard at Evergreen High School to ensure that our students understand the importance of inclusion, and have various student clubs and activities designed to celebrate diversity.

UPDATE: A video of the meeting confirms the attendance of Jefferson County school board member John Newkirk and superintendent Doug McMinimee at last week's meeting co-hosted by the white nationalist American Freedom Party. Board members Ken Witt and Julie Williams reportedly did not attend due to the major winter storm that hit last Monday. We have also learned that the principal of D'Evelyn High School did not attend either, though we don't know if this was weather related.

The video doesn't lie, though–Newkirk and McMinimee at least have some explaining to do. 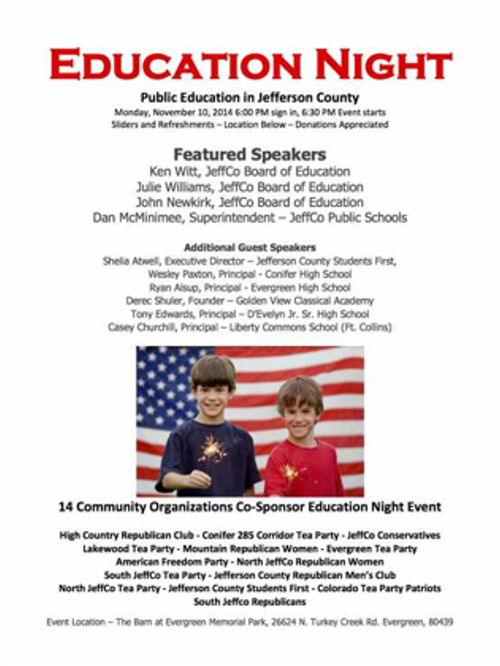 As you can see, the "community organizations" sponsoring this event are in fact mostly partisan Republican and right wing "Tea Party" groups. But one among the co-sponsoring groups shown on this flyer, the American Freedom Party, stands out in particular. That's because the Southern Poverty Law Center lists the American Freedom Party in their index of white nationalist hate groups:

In Their Own Words

“We want an America that is recognizable to us, one that we can feel comfortable in.”
– American Third Position website

“The initial basis of our own upstart organization is the racial nationalist movement. It has been in disarray for the last 20 years so there's not as large a base for us to draw on.”
– American Third Position Chairman William Johnson, Feb. 20, 2010, interview on James Edwards’ “The Political Cesspool”

Learning of this event, Jefferson County parents Tina Gurdikian and Kelly Johnson sent a letter this morning to the listed attendees demanding an explanation:

We find your participation in and even association with this group profoundly inappropriate and incredibly inconsiderate of the students and families you represent in this diverse school district.

1. Why you participated in this event.

2. Why you agreed to be associated with the American Freedom Party.

3. How your association with the American Freedom Party aligns with Jeffco Schools’ mission to “provide a quality education that prepares all children for a successful future.”

Bottom line: the fringe right wing affiliations of at least one member of the new Jefferson County Board of Education majority, Julie Williams, are a matter of record. It remains to be seen exactly how the American Freedom Party managed to become part of this event last Monday, which featured all three conservative majority board members and the new superintendent, but this could be the most unsettling evidence yet of their true base of support and intentions.

We'll update as this story develops, which we strongly suspect it will.