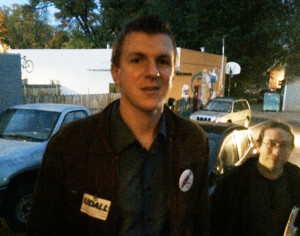 Conservative media lit up yesterday after conservative provocateur James O'Keefe released a video from his recent "vote fraud" sting attempts in Colorado. Last weekend, we got reports that O'Keefe was in the state attempting to bait Democratic field campaign workers into endorsing fraudulent acts involving mail ballots. Word spread fast from there, but evidently O'Keefe had been on the ground for some time before his presence was publicized.

In the end, it does appear that O'Keefe got what he wanted: out of presumably dozens of attempts where he was informed that his proposal would be felony vote fraud, it looks like he found two people willing to follow his bait into a very, very bad idea: collecting unused mail ballots from students who have moved or transferred, completing them, and turning them in.

Before we go any further, everyone does realize that is a serious crime, right? Good. Let's be very clear about what happened here: O'Keefe was able to lead a couple of low-level table staffers into saying some eye-poppingly stupid things. One agreed with him that turning in other people's ballots would be morally okay, the other actually volunteered "ghetto Aurora" as a good place to collect unused ballots. In both cases, what these staffers for nonprofits Work for Progress and Greenpeace respectively said was absolutely termination-offense unacceptable. We'll go a step further and say the one who got all racial about helping out O'Keefe with his fraud designs must, for the common good, never work in politics again. But in neither case is there any suggestion that these staff would have come up with the idea to do this were it not for O'Keefe's prompting. There's no actual plan by anyone to do what he suggests.

And there's a good reason for that: as our local media has done a good job explaining since O'Keefe's video broke yesterday, the ballot fraud O'Keefe is proposing simply would not work. 9NEWS reports that even GOP Secretary of State Scott Gessler can't defend O'Keefe's allegations:

County clerks are required by law to verify signatures on ballots. Gessler says there is a loophole in that law allowing signatures to go unverified if a witness signs the ballot.

But clerks contend witness signatures are rare, and they still have the power to scrutinize those ballots if they seem suspicious.

Witness-signed ballots are indeed rare–and as the Denver clerk's office explains, you can't just fish a ballot out of somebody else's mailbox and send it in. It will be caught:

"That check of signature verification is really the stopgap to prevent ballots that are being filled out by people who are not the voter," said Amber McReynolds, the director of Denver's elections division.

About 1.5% of the ballots turned into the Denver clerk's office so far have been flagged for signature verification according to this story. That doesn't mean they're fraudulent, of course, it just means that the signature on file with the Denver clerk didn't match the signature on the ballot envelope closely enough to mass automatic muster–or weren't signed at all. Affected voters are notified and given the opportunity to "cure" their ballot by verifying their signature. That's how the system has always worked for absentee and mail-in ballots, and it actually works well. Without anything to go on, what's a fraudster supposed to do to fake someone's signature?

Yes, there's probably some elaborate scheme that could be concocted to obtain examples of signatures of voters to believably forge on mail ballots. If we were to think about all the ways we could violate, you know, just about any law, there are elaborate Rube Goldberg machine ideas we could come up with to pull it off.

But nobody's doing these crazy things to commit vote fraud. It's much cheaper to get out the vote in legal ways.

In a sense, it's good that O'Keefe gave our county clerks a chance to explain how voting by mail actually works in Colorado. It won't mean much to the right wing media breathlessly reporting on O'Keefe's "proven vote fraud" video, or the consumers of said media who aren't really interested in facts that might render them less agitated. But the people who matter–Colorado voters–can be assured that our system does work.

When even Scott Gessler grudgingly admits it, you can feel pretty confident.